A conversation with the creators of 'Red Bird,' a new kind of Western 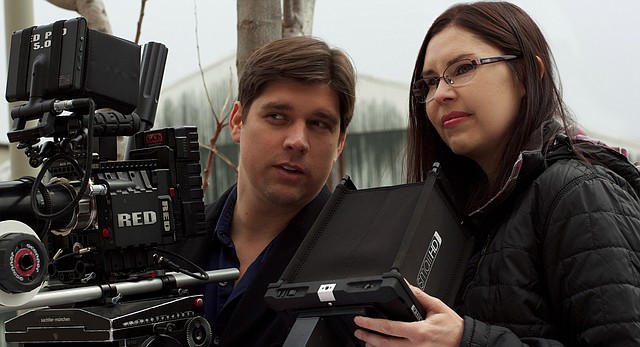 Lawrence husband-and-wife filmmaking duo Jeremy Osbern and Misti Boland, seen here, are the co-creators of "Red Bird," a Western web series inspired by the conflicts of the Bleeding Kansas era. The series rolls out its first two episodes Thursday at www.redbirdseries.com.

Thursday sees the release of the first two episodes of "Red Bird," the new Web series created and co-written by Lawrence husband-and-wife filmmaking duo Jeremy Osbern and Misti Boland. The gritty Western follows 1860s frontier woman Kitty Mae (Alexandra Goodman), a Lawrence mother mourning her 12-year-old son, who was gunned down by Missouri ruffians in a massacre not unlike the real-life violence of the Bleeding Kansas era. The boy's death sends Kitty Mae on a bloody quest for revenge, and she won't stop until every last man involved with the murder is dead.

A week before the series' debut, the Journal-World spoke with "Red Bird" director Misti Boland and cinematographer Jeremy Osbern about the project's local ties (it was filmed mostly in northeast Kansas), breaking genre conventions and the wild women of the Wild West.

Journal-World: The series kicks off with a tragedy that bears a pretty striking resemblance to Quantrill’s raid, right down to the time period, the setting and the violence that occurs. Was that event an inspiration for this story?

MB: Quantrill’s raid was a jumping-off point. Our series is fictional, but it’s based on a similar event. I personally have always wanted to develop a Western story of some kind, and to add something to the mix, I decided to throw in a female character.

JO: I had grown up in Lawrence and I’ve been here my whole life, so I’ve always been steeped in the history of Lawrence during the time period and the raids on Lawrence and the border war between Kansas and Missouri. I always wanted to do something on that. Misti moved here for college and had not grown up with it, so she started doing a lot of research. We came across all sorts of interesting things — not just Lawrence-related. Misti also came across stories of women who were just as brutal as men, fighting in the streets and tearing out hair and biting off ears. 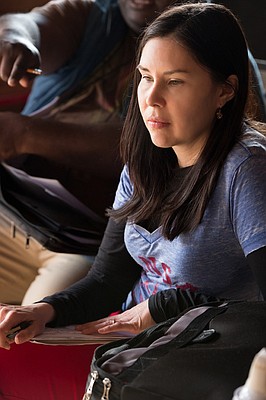 "Red Bird" director, co-creator and co-writer Misti Boland, pictured here on set, said the inspiration for her Western series came from the Lawrence historical markers listing the names of those who died in Bleeding Kansas conflicts, which she'd notice on walks around town. "Reading those signs, I thought, 'What would it be like to be a mother or a father of a son or daughter who died in a tragedy like that?'" Boland said.

Journal-World: Is Kitty Mae based on any particular woman from the Bleeding Kansas era? Did you discover in your research a real-life woman with this same sort of bloody revenge arc?

MB: No, there wasn’t that exact storyline. I think from my perspective, just walking around Lawrence, you can still see on the sidewalk and in front of the Arts Center and various places (historical markers) of like, “So-and-so died here.” Reading those signs, I thought, “What would it be like to be a mother or a father of a son or daughter who died in a tragedy like that?” That’s where that little inspiration for Kitty Mae came from.

Journal-World: Yours isn’t the first Western to deal with revenge as a major plot point. What is it about the Western genre that makes it a natural fit for these revenge stories?

JO: Around the world, the American Old West has been sort of immortalized. I’ll go to Europe, and usually it’ll come up in conversation with someone that I’m from America. And they’ll ask, you know, what are my thoughts on these cowboys? Germans and Britons are really obsessed with Jesse James and all these other characters. I think it’s the idea of just this insane, lawless time where there was so much land and so much expanse of nothing, where anything can happen, and if something does happen that’s tragic, there were a lot of people who did have to take the law into their own hands. So a revenge narrative fits nicely into that geographic landscape and that social landscape of people being isolated and not necessarily having the same system we have today to feel like they can get justice. 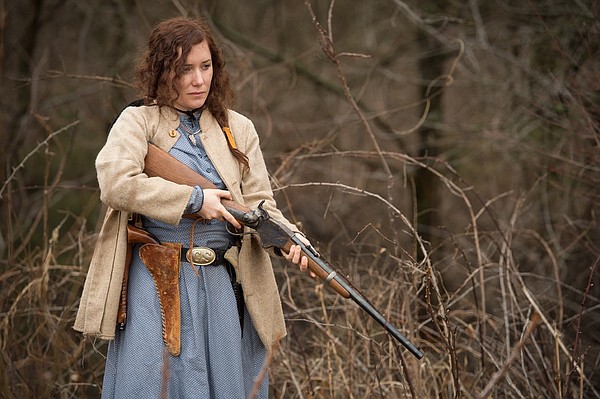 Actress Alexandra Goodman, in costume as Kitty Mae, brandishes her character's weapons of choice in this behind-the-scenes image from "Red Bird." The new web series, which tells the tale of frontier woman Kitty Mae's quest to avenge her murdered son, premieres Thursday.

Journal-World: Misti, you mentioned earlier that you wanted to add something different to your Western project with Kitty Mae. How important was it to you to have a female protagonist?

MB: We don’t normally see, or at least I don’t see, that particular character as a female in Westerns. I thought it would be a very interesting and independent element to go ahead and feature that.

Journal-World: Is she this tough gunslinger to begin with? Or is she a more typically docile woman of the time period who has a switch flipped inside her at one point?

MB: At the start, she is not vicious in any way. She’s a loving, doting mother. And then, not just watching her son be murdered but watching this invasion — it wasn’t just her son, which is a very big thing in itself, but all the men in her community are just brutally murdered in the middle of the night. She’s witnessed all this violence and she wants to find a way to get justice for it.

JO: But as a character, she still wears dresses and rides sidesaddle and, you know, doesn’t necessarily look like a gruff version of a gunslinger. She’s still feminine as she’s blasting away at 40 different men.

MB: So, she’s a little different from what we see in characters such as Calamity Jane, who are very masculine visually. 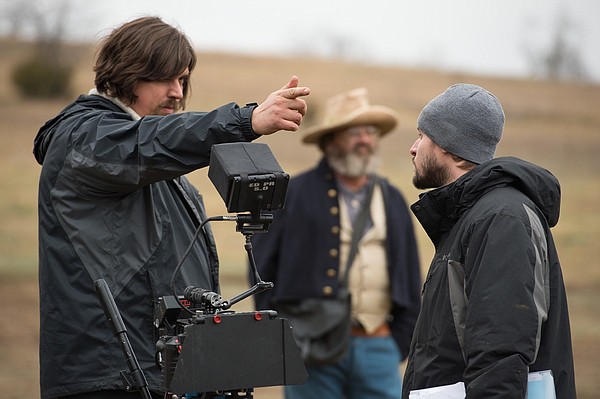 "Red Bird" co-creator, co-writer and cinematographer Jeremy Osbern, left, talks with producer Chris Blunk during production. The Western web series, which tells the tale of a Bleeding Kansas-era Lawrence mother on a quest to avenge her murdered son, will roll out its first two episodes Thursday.

Journal-World: How do the men in Kitty Mae's world react to her behavior?

JO: As it goes along, we are introduced to her husband and her husband’s parents, and her father comes into it too. There are a lot of male characters who are important in Kitty’s life who are trying to help her or stop her from doing what she’s doing. Even the Bloody Bill character she’s trying to hunt down — on the surface, he’s characterized as the villain, but hopefully we can imbue a more human element with him as well.

Journal-World: You’ve described the series on social media as “a reflection on the fine lines that tear apart countrymen and the endless cycle of violence and death that is caused by small differences and the need for revenge.” It sounds a bit like that old “brother against brother” adage you always hear about the Civil War.

MB: We’re definitely inspired by Bleeding Kansas and the border wars. It’s interesting, too, because during that conflict, you do have the soldiers, but then you have also have everyone else that’s going for it, too. Lines get blurred, and in the end, people get hurt and they lose the people they love. It doesn’t quite make sense at the end of the day.

JO: The series starts off with the audience definitely rooting for the Kansas side of the border and then hopefully by the end, audiences will be a little more torn because you start seeing the cracks in Kitty Mae’s quest for revenge and how that affects the families of the people she’s killing. Hopefully it will create a little more introspection about both sides of the conflict. It’s not just pro-Kansas or pro-Missouri — it’s showing how the violence split everyone apart and hurt everyone.

Journal-World: Do you think we still see that mindset playing out in contemporary times?

JO: Oh, yeah. John Brown was referred to in Kansas as a hero and in the South as a terrorist. There could be parallels that people could draw between the Civil War era and the violence that’s going on today. Maybe, even though it’s a very violent and very entertaining piece to watch, this one series will lead to people examining their thoughts on violence and which side they’re on. 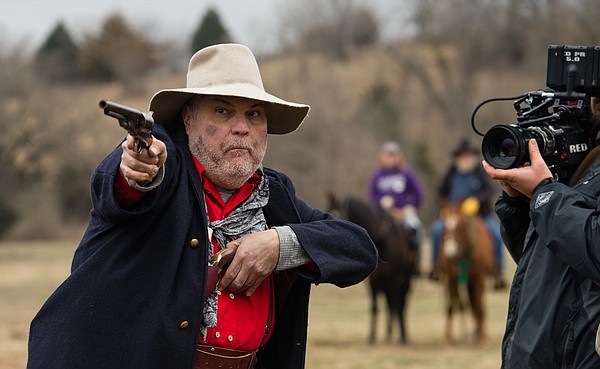 Michael McShane, seen here on the set of "Red Bird," plays Sam, a gunslinger with his own reasons for finding Kitty Mae. The web series, which follows frontier woman Kitty Mae's quest to avenge her murdered son, rolls out its first two episodes Thursday.