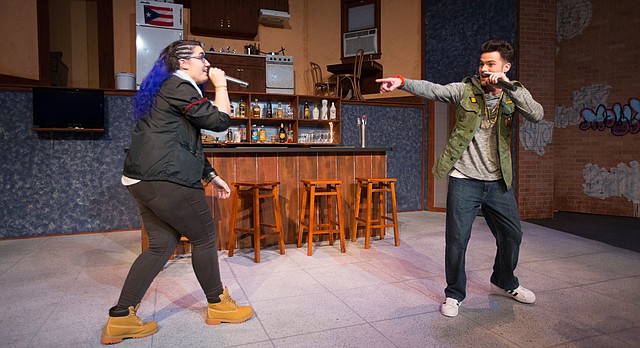 In “Welcome to Arroyo’s,” KU Theatre’s current production, a pair of DJs (played by Bronwen Capshaw and Nathan Kruckenberg) serve as the ubiquitous Greek chorus.

While the student actors — who learned the ropes by shadowing a real-life DJ during club gigs — literally spin records onstage, they’re also providing a metaphorical “remixing” of the action as it unfolds.

Or, as Nicole Hodges Persley, the show’s director puts it, “They’re spinning the story as they experienced it back to us,” in a way that at times shatters the fourth wall and pulls the audience into Arroyo’s, the bar and lounge where Trip and Nelson, the aforementioned DJs, are trying — without much success — to launch their music careers.

“This is part of a call-and-response tradition that’s really coming out of African-American cultural deposits within hip-hop,” says Hodges Persley, an associate professor of theater at KU. “The idea is that it’s a way to have a conversation with the audience that is asking, ‘What do you think?’ or ‘Do you know this?’ or ‘What’s happening here?’ It’s one of the things I love most about hip-hop theatre — it’s creating theater that is really asking audiences to get engaged with the things that are facing young people today and asking them to notice the things that are happening instead of being bystanders to it.”

It’s also a genre that is relatively young and has only recently started cropping up in academic texts, says Hodges Persley, who counts herself as one of the movement’s earliest scholars and artists. That’s partly why Hodges Persley found herself drawn to “Arroyo’s,” which, like its peers in hip-hop theater, isn’t likely covered in her students’ textbooks or courses.

Likewise, the play offers its own history lessons on hip-hop, bringing to light some of the “unsung heroes and heroines” of the genre, Hodges Persley says, and how they helped establish an art form that is itself often misunderstood.

“Welcome to Arroyo’s,” which runs through Thursday at KU’s William Inge Memorial Theatre, is a thoroughly modern tale that deals in some pretty timeless themes — among them identity, loss and love. Penned by one-time Pulitzer Prize finalist Kristoffer Diaz, the urban coming-of-age tale follows a pair of siblings, Alejandro (Juan Gonzales) and Molly (Alejandra Villasante), in the aftermath of their mother’s death.

The action takes place in 2004, in a Puerto Rican neighborhood in New York City’s Lower East Side, where hip-hop is not merely a musical genre but a way of life. Alejandro is having trouble attracting customers to his new lounge (the building was once his mom’s bodega) and Molly, a budding graffiti artist, can’t stop tagging the local precinct.

Tensions arise when Lelly (Cassidy Ragland), a college student who left the neighborhood years ago to pursue an education, returns with a theory that the Arroyos’ mother may have been Reina Rey, a famous hip-hop pioneer still shrouded in mystery. Lelly theorizes that the siblings’ mom disappeared from the scene after becoming pregnant, which Alejandro, in his grief, isn’t quick to accept.

“She could have been the equivalent to some of the men who get the attention as being at the forefront of hip-hop, but women have always been at the forefront of hip-hop, and part of building it — as graffiti artists, as dancers, as MCs, in every aspect of hip-hop culture,” Hodges Persley says. “I think Diaz is drawing our attention to that, but also at the same time coupling that with the fact that it could have been a Latina woman, I think, is an important message.”

In “Welcome to Arroyo’s,” questions about gender — how does a woman, especially one with children to support, Hodges Persley asks, “make herself legible in an art form that seems to showcase the cultural production of men?” — are at the forefront, running alongside and intersecting those about race. 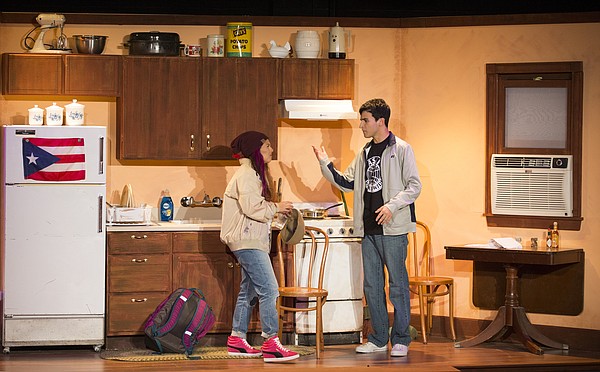 Alejandro Arroyo, right, played by Juan Gonzalez, and Amalia (Molly) Arroyo, played by Alejandra Villasante, argue in the kitchen of their Lower East Side apartment during a dress rehearsal for "Welcome to Arroyo's," Wednesday, April 27, 2016 in the William Inge Memorial Theater at Murphy Hall. by Nick Krug

Hip-hop emerged out of African-American, African diasporic and Afro-Latino communities in the Bronx more than 40 years ago, yet today — even as the art form attracts an increasingly multiracial swath of practitioners and consumers — many fail to understand the role of Latinos in its inception, Hodges Persley says.

“Welcome to Arroyo’s” explores that often-untold history. The DJs struggling to find an audience must ask themselves what it means to be Jewish-American or Italian-American in an industry that is predominantly produced by a culture they were not born into. Lelly, who is dismissed as a “white girl” despite her Puerto Rican heritage, feels uncomfortable and alienated from her old neighborhood, where her college degree, speech and manners are racialized as “white.”

“This is something Lelly’s battling with,” says Hodges Persley about the very universal theme of where — and to whom — we belong. “What is her ethnic or racial identity? And does she have the right to tell a story?”

“She is a Puerto Rican woman. She may not be Puerto Rican in the way that they identify what that means to them and their community, but she has to figure out what it means to her.”