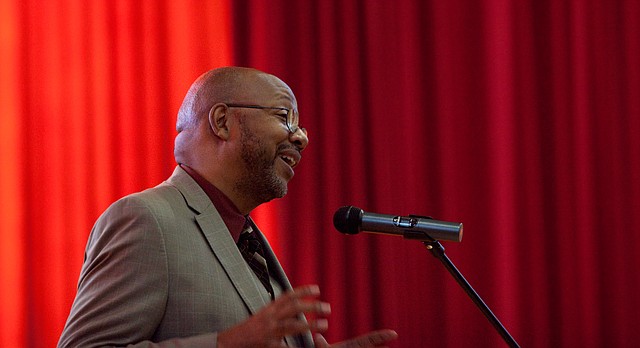 In this file photo, Pulitzer Prize-winning columnist Leonard Pitts Jr. of the Miami Herald smiles as he speaks to those attending his lecture "In the Measure of a Man," on Tuesday, June 14, 2011 at Liberty Memorial Central Middle School.

Pulitzer Prize-winning Miami Herald columnist Leonard Pitts Jr. will stop by Lawrence’s Abe & Jake’s Landing next weekend for the ACLU of Kansas’ inaugural Free State Forum, where he’s slated to give the keynote address and sign copies of his 2015 novel, “Grant Park.”

Before his appearance here, Pitts offered his thoughts to the Journal-World on writing, Internet loudmouths, “moral laziness” and why Obama is like a Rorschach inkblot:

Your third and latest novel, “Grant Park,” is about a columnist who hacks into his newspaper’s content management system to publish an incendiary column about being “tired of white folks’ bull(stuff),” to borrow a line from the book. Have you ever been tempted to just go for it like that?

I haven’t been tempted in the least because, unlike him, I value my career and my paycheck. I’ll never be that tired, but I think anyone who’s African-American who writes particularly opinion for a living will have no trouble understanding where that character’s coming from. You know, if you get a bunch of African-American columnists or pundits in the same room, you’re going to hear the same stories, and it’s all about basically having to explain the same things over and over again — things that should be glaringly obvious but that people seem to have a vested interest in failing to comprehend. I’ve lost count of how many people think they can stump me by saying, “Well, there’s a Miss Black America contest. If there was a Miss White America…” But that’s sort of the level of discourse. You’re hearing this stuff over and over again and in the meantime you’re seeing children like Trayvon Martin or Tamir Rice dying for no reason at the same time you’re seeing the mass incarceration phenomenon just really chewing up lives. There’s a definite level of frustration that comes from all that.

Cost: Tickets range from $35 to $60, and can be purchased at www.aclukansas.org.

You were interviewed a few months after the Charleston church shooting and mentioned Elisabeth Hasselbeck’s claim that the murders were an attack on faith and not necessarily racially charged, and how difficult it is for some people to see incidents of racism for what they are. Why does this happen?

If you’re white and you think of yourself as person of sound moral character, and you see that there are benefits that accrue to people in this country because they’re white and that there are demerits that accrue to people because they are not white, you essentially have two options to maintain your good opinion of yourself: You can do something, you can take a stand, you can take action, or you can say, “It’s just their imagination.” Doing something and taking a stand involves, one, getting up off your backside and, two, maybe some risk to your place in society. Frankly, there’s a moral laziness to stuff like that, and with the Charleston church (shooting), it reaches levels that are truly astonishing. It wasn’t just Elisabeth Hasselbeck. The police said within an hour after the shooting that this was a hate crime (against African-Americans). And yet the morning after, you’ve got (Glenn) Beck and all these other people saying it’s an attack on faith or it’s this or it’s that, because if I say it’s an attack on faith, then there’s no onus on me.

Going back to “Grant Park,” your protagonist is at one point kidnapped by a group of white supremacists. You were never kidnapped, but you did receive death threats and quite a bit of harassment from white supremacists in response to a column you wrote about 10 years ago. Did that experience inspire or inform what happened to Malcolm Toussaint?

With fiction, it’s always the idea of “what if?” I didn’t feel any particular need to try to recreate my exact experience, but I did want to draw on that a little bit just to illuminate what I was trying to get at with Malcolm. The real thing that I was getting at that comes from the column was just the incoherent political discourse. American racial and political dialogue has just gone completely insane, and that’s one thing that I was really quite purposefully trying to illuminate in that book. That’s why (kidnappers) Clarence and Dwayne make so little sense and are so absurd even though they’re dangerous. It gets to this idea that we have all this anger, but it’s mounted in this real fact-free, fact-optional, really deeply stupid vision of things. Once upon a time and not so long ago, we could disagree with each other, but disagreements were grounded in facts. Disagreements are now much less likely to be grounded in facts. We’ve gotten into this era where it’s sort of OK to make up your facts, and people aren’t even embarrassed by it.

Speaking of that phenomenon of acting on emotion rather than fact or logic, you’ve said in regards to some of the angry emails you receive that those people would never say those things to you if they were having a conversation with you at the bar, for example, that somehow you’ve become unreal or abstract to them. Where does that mental state come from?

I think the Internet — or the whole communications revolution, I should say — doesn’t really foster a whole lot of reflection and thought. The point has been made — and I think there’s something to it — that once upon a time, say, 20 years ago, if you wanted to write a letter to respond to a columnist who’d made you angry, you had to go get the paper and load it into the typewriter or type it up on your word processer and then print it or type it up or whatever and then sign it, and get an envelope, address the envelope, stamp the envelope and then go out and mail the envelope. Somewhere in all that time and in doing that, there’s a little time for some reason to set in. But these days, you snap up a comment (online) and it’s gone. There’s not really a lot of time for people to think about what they’re saying, and I think as a result really ignorant stuff gets said.

And then there’s the argument of “Oh, I could write a column. I could do your job better than you could.” How do you react to stuff like that?

I’m amused, because you probably could write a better column than me once. Everybody has one great column in them. Anybody that has an opinion or can write even a little bit — they’ve got one great column in them. That thing that’s been burning in their gut a long time — they could write that. But then two days later when deadline comes and it’s time for the next column, most of them would come up dry. The thing about writing a column that a lot of folks don’t understand is that this is a marathon, not a sprint. You’re doing this twice a week for 20 years or whatever. That takes some doing. This is not something that I knew going in. It’s something you learn after you’ve been doing it a few years. Whether you’ve got a ton of topics or whether you are bone-dry in terms of topics doesn’t really matter. Deadlines come when deadlines come, and you better have something.

You once said that Obama is like a Rorschach inkblot. Do you still see him that way?

Obama is a Rorschach inkblot in terms of race. I think it’s fascinating that people see so many things out of a guy who essentially in terms of race has done nothing but be black while being president. He has only spoken about race pretty much only when required by the news events to do so. He spoke about Michael Brown’s death and didn’t say anything particularly provocative. He spoke about Trayvon Martin’s death and said, “If I had a son, he would look like Trayvon,” and everybody jumped on him. I think Obama essentially hasn’t done a whole lot or said a whole lot in regards to race, but he has really forced a lot of folks to reveal where their heads are at in regards to race. The most recent thing is he gave a speech at Howard (University) and told the kids to embrace their blackness and be proud of their blackness, which should be an uncontroversial statement, and predictably the good folks over at Fox News had a coronary over it.

Obama came along at a time when our political landscape has become increasingly divisive, with a lot of people blaming him fairly or unfairly for creating that divisiveness. Do you think this polarization is here to stay?

I’ve given up trying to predict the end of polarization, I really have. There have been so many times when it’s reached such a crescendo that I’ve said, “OK, I’m sure that we’re done now. It can’t get worse or more insane than this.” And every time I say that, it gets more and more insane. I think Obama said that his reelection in 2012 would break the fever and I felt kind of the same way, but it did not break the fever after his reelection. One man committed suicide, and there was talk of revolution and secession — that lets me know that OK, there’s no predicting where this ends. This is here to stay for a while, unfortunately.