Ira Glass on storytelling, the state of journalism today and the runaway success of 'Serial' 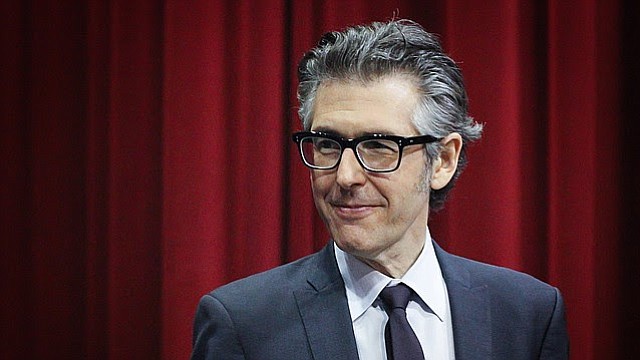 Ira Glass, host of the public-radio program "This American Life," will make an appearance at the Lied Center at 7:30 p.m. Nov. 5.

Lawrence’s public-radio nerds are in for a treat this weekend. On Saturday, longtime “This American Life” host and producer Ira Glass (the veteran journalist is also the editorial adviser behind the megapopular “Serial” podcast) will stop by the Lied Center to share “Seven Things I’ve Learned.”

The multimedia talk, slated for 7:30 p.m., covers more than just seven lessons, however, from a career that spans nearly four decades, several broadcasting accolades and more quirky, poignant and ultimately informative “This American Life” stories than we could possibly mention.

Here’s an edited and condensed version of the Journal-World’s chat with Glass, who had plenty to say on storytelling, the state of journalism today and the runaway success of “Serial.”

“This American Life” celebrated its 20th anniversary last year, so I wanted to talk a little bit about how it’s evolved over the years. When the show started out, there was more of a focus on human-interest, slice-of-life-stories that were maybe a little smaller in scale….

The way we think about it is applying the tools of journalism to stories that are so small that journalists wouldn’t bother with them.

In recent years, “This American Life” has expanded to include what some might recognize as a more global perspective. For instance, in the past few months, you’ve produced a series of stories that explore life in refugee camps in Greece. Do these projects seem to have the same amount of traction with listeners as some of the more light-hearted stories?

I mean, honestly, we don’t have empirical data. One of the things that I would love is if people's podcasting apps would send us back data and tell us, “Did you stop listening in the middle of the episode and never come back to it? Please tell us, what minute and second did you stop?”

I mean, I know that the audience response has been really strong to the shows where we take on serious things. With the refugees one, I have to say, I would expect we would lose people, is the truth. And I feel like we did everything we could to make those shows as emotional and funny and as surprising as anything we do. But I think when you’re taking on a subject that people think they already know everything about — like the refugee crisis in Europe — I think on its face it’s a very hard thing to bring people along for.

You remarked once that most of the time, you feel really afraid of getting things wrong, “like any reporter.” Do you think that’s a healthy attitude, to some extent, for journalists to work with, as far as always being aware of the consequences of what can happen if we get things wrong?

Yes, I do. I mean, I feel like whether it’s healthy or not, it’s the attitude that I have. So, I’m deciding to think that it is healthy. And for me, getting it wrong includes not just factual errors, but also (we want) to come up with something that’s exciting enough for people to want to engage with.

You know, especially in the last two weeks, we’ve done all this stuff on the elections, and we feel like we’ve really, really gone as far out of our way as we can to try to invent material that’s different from anything anyone’s doing anywhere else. And so that includes commissioning songs (performed by) Neil Patrick Harris and (“Hamilton” star) Leslie Odom Jr., and also this incredible documentary story that Zoe Chace on our staff did in Minnesota about a town where the white people have become convinced that their Muslim neighbors are trying to impose Sharia law on them, against all evidence.

So, for me getting it wrong includes that it’s just kind of OK, you know? I feel like if you’re doing a weekly show, things have to be really special.

It’s interesting that you brought up those recent episodes on the election, because I wanted to ask you about the challenges journalists are facing in this election that is unlike anything we’ve seen before. Do you have any advice for journalists who are struggling right now in trying to do their jobs in a way that the public generally feels is accurate and fair? Is it even possible to avoid accusations of bias at this point?

I don’t have any advice for anybody on this one. I think we’re in an environment where people are super-suspicious of mainstream journalism, of all of us, and there’s nothing anybody can do about that. And the best we can do is to be fair to everyone on all sides and look into things, the facts behind them, in every case. And that’s it. That’s all we’ve got. That’s the only weapon we have.

And I do think that there are people out there doing a really good job, too. Some of them would be classified as the right-wing media. Chris Wallace is such an impressive journalist. Megyn Kelly has been so impressive. It’s not just mainstream media that’s doing a good job. There are people doing a good job all over the place. But yeah, I think the audience of journalism is not happy with journalists, for sure.

Do you worry that this huge mistrust of media we’re seeing right now might have long-term effects that go beyond the current election cycle?

I do worry about this, yeah. I worry that fact-based journalism is seen as just one version of the truth instead of being the version that’s built around facts.

We did an episode about this two weeks ago based out of my profound fears about this. It was built partly around this conversation with my Uncle Lenny where we was saying to me the sort of things that he’s heard in the right-wing media and believes. I’ll say to him, “That’s not true, that’s not true.” He just doesn’t believe me. I know what I’m saying is right. I have the facts on my side. He just doesn’t believe me.

So, it’s hard. It’s just a very sobering place for anybody who’s in the facts business right now. We’re churning out a product that a lot of people just don’t care about.

“Serial” has been hugely popular, and there’s been so much written over the past few years about how long-form journalism has become this endangered species, that people just don’t have the attention span for it anymore. Does the success of “Serial” say otherwise?

Yes. For me, I’ve always thought the idea that people don’t have attention spans is so demonstrably untrue. It’s so stupid. It’s so annoying. On the one hand, yes, we all are on our phones flipping back and forth between two websites and Twitter and Facebook — you do that, I do that, everybody does that. But at the same time, the most popular thing in the culture are these television series where it takes 27 hours to get through. And we all sit through them. Long-form has never been bigger. Long-form is doing great.

So the success of “Serial” just shows that, yes, people will be interested in a long-form piece of reporting if it’s done in a way where it’s clear how to invest in the story. When (“Serial” host and executive producer) Sarah Koenig and her producer Julie Snyder were making the first season of “Serial,” one of the things Julie would say is, can you do a piece of investigative journalism that would have the power that those TV series that we all binge watch, have? Can you pull people in with the situation at the beginning, and people will come back week after week because they wanted to know what happens? And the answer is obviously yes, as “Serial” showed and some other shows have shown. People will pay attention to stuff if it’s good and it’s interesting and if it’s anything new.

You’ve held basically every job there is in public radio. What have you learned about yourself as a storyteller in that time? What works for you and what doesn’t?

I’m interested in a conversational tone in a kind of informal narration style. I’m interested in stories where you introduce the characters quickly and there’s a way to relate to the characters and invest in them emotionally. And there’s a plot, and the plot has surprises, and the plot leads to some thought about the world, and the thought is kind of interesting or surprising. And there should be funny moments and there should be something sad, if it’s going to be really good.

That’s the stuff that I decided what works for me and this is what I want to make. So, that’s kind of what we do on the show. What I’ve learned about myself as a storyteller is (recognizing) when I go through phases in making a story and really stall out and have to force myself through the writing of it and all of that. And I’ve learned obvious things like, everything goes better if I’m amused by the material. But that’s true for anybody who makes anything or has any job. Like, everything goes better when you’re enjoying yourself.