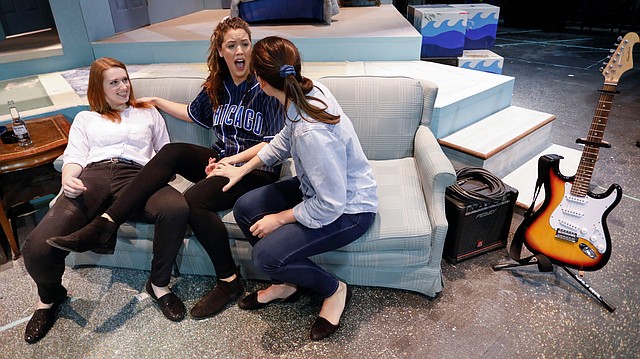 University of Kansas students and actors, from left, Kendra J. Hacker, as Jenny, Kristen A. Larsen, as No-No, and Victoria Kilkenny, as Ash rehearse on Stage Too! in Murphy Hall, Thursday, Nov. 3, 2016.

Think of it as “The Big Chill” for a new generation.

Much like the 1983 film about a group of baby-boomer college pals who reunite after the death of an old friend, “Pooter” explores what happens when millennials, facing a quarter-life crisis opposed to the mid-life variety depicted in “Chill,” do the same.

“It’s a play about millennials for millennials,” says Zazzali, who also serves as an assistant professor of theatre at KU.

And because of that, the semi-autobiographical tragic comedy, penned by New York-based playwright Padraic Lillis, draws heavily from the shared experiences of today’s young people.

The characters, at 24, are not much older than the student actors portraying them onstage. Three years after college graduation, they’ve gathered to mourn the death of a friend who once helmed their now-defunct rock band way back when.

She was talented, full of promise and ready to make a name for herself in the music industry, and her passing, Zazzali says, symbolizes the very real dashed hopes and dreams of today’s young people.

The rising cost of college, paired with crippling student debt, has left many millennials feeling “disaffected” by the world they’ve inherited from their parents and grandparents, says Zazzali. Add to that the vulnerable state of the environment, the national debt, racial tensions and an increasingly divisive political climate, all of which have contributed to a widespread sense of despondency among twentysomethings.

“Not unlike the characters in the play, they’re having problems looking forward,” Zazzali says of his student actors. “They’re clinging to the past, because that’s when they had an identity that spoke to them, when they felt like they had joy, they had structure, that their lives had meaning.” 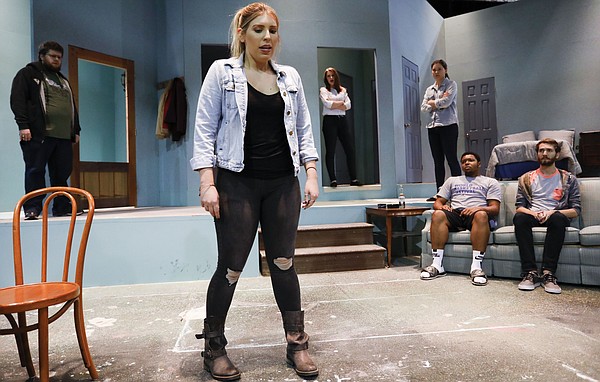 The cast of “Pooter McGraw is Not Dead Party" rehearse at Stage Too! in Murphy Hall on the University of Kansas campus, Thursday, Nov. 3, 2016. by Mike Yoder

The show’s playwright, Padraic Lillis, is a friend and contemporary of his. Both men are roughly the same age, and Zazzali just turned 50. Though he relates to the universality of struggling to find one’s place in world as a young postgrad, Zazzali says “Pooter” has helped him better understand an often-misunderstood generation.

“I see it with my own students,” he says of the disaffectedness plaguing so many millennials today.

“I feel like I’m learning more about your generation and feeling moved by you guys and somewhat ashamed by my generation and what we’ve left you, which is nothing but a big problem,” he continues. (The reporter interviewing Zazzali is, like the characters in the play, a dreaded millennial.)

And Zazzali’s young actors, who have yet to endure the postgrad blues, are keenly aware of what’s ahead. Perhaps they don’t want to go there. Zazzali wouldn’t blame them, but, he adds, they’re also somewhat “inspired” by the play, which has its moments of humor and warmth, he attests.

In a world that has become increasingly smaller with the advent of smartphones and other handheld devices, people (often millennials) are less connected, at least on an emotional level, than ever. This phenomenon of “not being present with each other” is often seen as an issue plaguing millennials so wrapped up in their screens that they’ve forgone basic human interaction.

Folks Zazzali’s age, he concedes, are the ones who invented much of that technology in the first place. Still, he says, “Pooter” isn’t all doom and gloom. The play, as much as it ruminates on some of the sadder elements of a disaffected generation, is as much a celebration of friendship as anything else.

“It’s really about people talking to each other and sharing an experience,” Zazzali says.

And that’s something older generations — not just aimless twentysomethings — will appreciate, too.