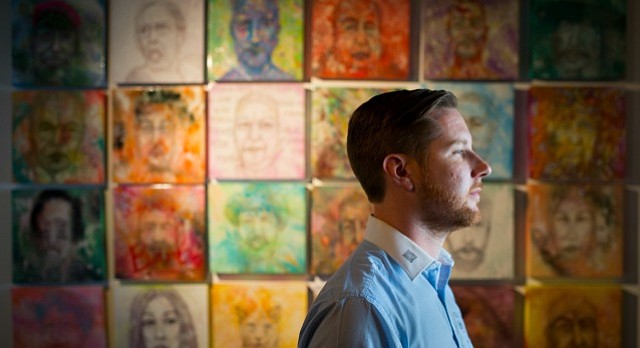 Lawrence artist John Sebelius is pictured before a wall of portraits from his upcoming show, Cupcakes, which opens on Black Friday at Phoenix Gallery. The show features 65 portraits of various encounters with people Sebelius has met through his travels around the country.

The show, which features 65 12-inch square portraits on masonite, conjures Sebelius’ memories of figures met through various encounters on journeys around the country.

Sebelius says he somewhat fell upon the title for the show while listening to a fellow artist friend describe individual pieces as "cupcakes," because they are small, colorful and many of them are glazed with epoxy resin.

“When you say the word 'cupcakes,' there’s a warm loving feeling that comes from that, and it relates to my memories and thoughts about some of my experiences with this group of individuals,” he says.

In one panel from the show, a mustachioed Pat the Hat casts a welcoming smile as soft pastels accompany him and evoke the feeling of a jovial disposition and a likewise pleasant encounter. In the frame directly to the right, a distant and demonic figure gives a look of warning behind swaths of deep red.

“I attack those materials in different ways for that experience,” says Sebelius of his color choices and the narrative that is created from one panel to the next. “A lot of that thought forced me to choose specific colors that might be rougher around the edges and others that are a little bit more clean.”

Turning back to the figure in red, Sebelius shares his impression.

“This is a guy that we saw in Sturgis, [South Dakota]. A boss honcho biker dude that just looked bad as hell,” Sebelius said. “That face and that feeling just stayed with me in that he looked super dangerous, a dude that you would not want to step on his shoe on accident.”

With that, he explains that some of his portraits are of people whom he got to know over the course of his travels. Some, like the biker, are based on impressions made instantaneously. Other figures don’t represent real-life people, but rather personify Sebelius’ observations and questions about various places.

One such example exists in his black and white portrait of a child from Slab City, who is smiling affably with a mouthful of braces.

“This isn’t an actual person,” said Sebelius, who visited the very small and notorious squatter town in California and described it as being "totally off the grid." “A school bus cut through the town … It blew me away that there were actually children living there,” he said.

On Thursday, in Sebelius' space at SeedCo Studios, all of the portraits were occupying his work area before their transfer to Phoenix Gallery. They all seemed to get along just fine despite sharp differences in their many personalities.

“There are people who have been very off-putting and others who have been very welcoming,” says Sebelius. “I’m hoping that they all don’t resonate the same. It’s definitely not all positive, but I think they’ve all affected me in a positive way of just changing an experience somehow.”