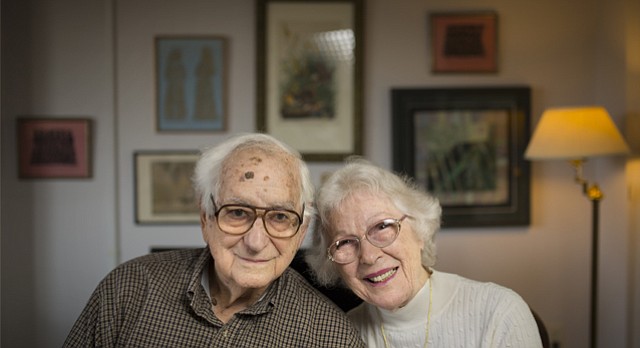 Lawrence couple Hob and Helen Crockett celebrated their 74th wedding anniversary on April 10, 2017. Hob, 96, and Helen, 93, had seen each other in person just three times before they got married, they said.

When asked what she remembers about the first time she met her husband, Helen Crockett’s eyes light up. She smiles, and raises both hands in the air.

Three quarters of a century later, that “tall, dark and handsome” airman is sitting beside her in their Lawrence home. Walter “Hob” Crockett has his own recollections of the day they met.

“She was very pretty,” he said. “A beautiful, nice, Southern girl.”

They had only seen each other in person three times before they got married. Their wedding — on April 10, 1943 — made it four.

Hob is a retired professor of social psychology at the University of Kansas, and the couple live in an apartment at the edge of campus.

Lawrence couple Hob and Helen Crockett celebrated their 74th wedding anniversary on April 10, 2017. Hob, 96, and Helen, 93, had seen each other in person just three times before they got married, they said.

While there’s no definitive list, the Crocketts could be the longest-married couple in Kansas. A couple married 67 years was listed as the state’s longest-married in Worldwide Marriage Encounter’s 2016 Longest Married Couple Project, a widely referenced national contest.

The day they met, Helen, then Helen Cheairs, was visiting her brother, who was in the Air Force in Oklahoma. The whole family came up from Memphis — Helen, her two sisters, her parents and her brother’s then-girlfriend, later wife.

Her brother and his girlfriend were going out dancing, and he set Helen up with his friend and fellow airman Hob.

“We had a very pleasant time,” Helen said. “All we did was hold hands. We didn’t kiss goodbye.”

Their courtship was mostly letter-writing, and they married in less than a year.

Hob, a Kansas native, did a tour abroad with the Air Force before returning home. He got his undergraduate and master’s degrees from KU, then he and Helen moved to the University of Michigan, where Hob completed his doctorate.

Hob worked his first few years at Kansas State University, “but we wanted to see more of the country,” Helen said. When a job opportunity arose at Clark University in Massachusetts, Hob took it and they stayed about 12 years. Hob returned to KU in 1968 and retired in 1988. 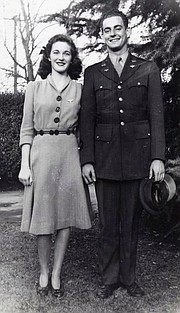 Hob Crockett and Helen Cheairs are pictured in this engagement photo, taken in December 1942. They were married on April 10, 1943.

In the Crocketts’ case, a path that breaks some marriages strengthened theirs.

“We both kind of grew up together,” Helen said.

Added Hob, “We developed together.”

They married when Helen was just 19 and Hob 22. They started a family right away, and their three children were with them through multiple moves.

“They both grew,” he said. “When I was a kid I thought they were very old, but I was very young... It’s always a trapeze when you’re married, but they’ve done it just great.”

After Hob’s retirement, Hob and Helen Crockett continued doing things they enjoyed together, especially traveling and playing bridge, they said.

Now, they enjoy talking about politics, playing a word game named Quiddler, doing crossword puzzles and, sometimes, singing together. They also like watching the KU students hike up and down the hill outside their window.

The world has changed a lot since the Crocketts' old-fashioned courtship and wedding vows, they said. But they said they would advise others to enjoy themselves and stick with it.

“The thing is, the intention is to stay married,” Helen said. “You hope that you would stay married and resolve any issues that came along.”