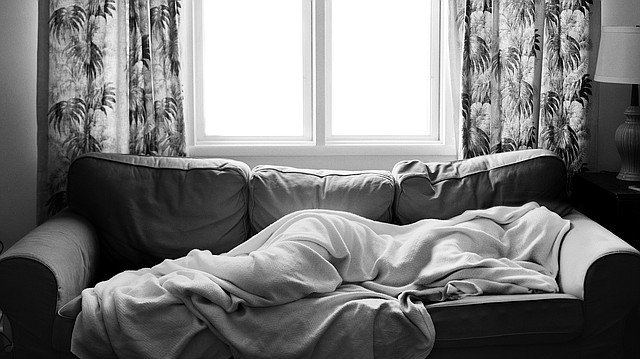 For many attuned to the Kansas art scene, the name Daniel Coburn might recall beautiful black-and-white images of sweeping Kansas landscapes with not-so-subtle indications of the human impact on our environment.

Although Coburn has certainly received recognition for his portrayals of nature’s complex relationship with humans, he was recently awarded a 2017 Guggenheim Fellowship for his work that has involved rotating his lens 180 degrees and turning his attention to another complexity: his own family history.

In a recent conversation, he discussed his work, which he explained evolved from a concept that views the family photo album as an idealized construct of the American Dream. In doing so, he examined and took inspiration from pieces of 20th-century advertising, especially those selling cameras.

“I looked at a lot of Kodak advertisements, and they’re selling you these cameras, but also, in the photos and in the illustrations that they use in those ads, they’re also instructing you on how to make the ideal family photo album,” he said. “People tend to emulate the images that they see in advertising and media. They want to tell a happy story about their family. The family photo album at some point changed from being about preserving memory to keeping up with the Joneses.”

In Coburn’s collection “The Hereditary Estate,” he reassembles the idea of the family photo album through images of his own parents and relatives, which come equipped with sadness, discord and vulnerability.

“There were definitely some dark family narratives that I learned about as I came to adulthood,” he said. “I started to relook at my family photo album, and there was nothing in that album that hinted at this. What I really wanted to do was set out to create a set of pictures that would tell a more complete story of my family.”

In an image titled "Interment," light pours in through a window between palm tree drapes onto a figure fully enveloped in a blanket on a couch. An image of Coburn's mother, titled "The Matriarch," shows her lying on a bed with eyes open as a bright shaft of light hits her face.

Coburn says the images of his parents were not preconceived, but rather developed organically after having conversations with them about unsettling elements of their own family history. He views them as artistic collaborators, he said.

“I think of myself as a bit of a filmmaker or a novelist and they’re actors," he said. "If you think about the way (novelists use) the people in their lives to inspire a complex set of characters, I’m using my family as characters. They are themselves. When I photograph my dad, that is my father, but it’s also me. It’s also my nephew. It’s also my grandfather.”

Through working with him, Coburn explains his family members are helping him communicate a larger theme about “the complicated nature of family that is often oversimplified in family photo albums.”

As far as what readers will take away from his work, Coburn says he isn’t interested in prescribing a particular impression or thought. Rather, he hopes his work encourages a conversation, one that he is not yet ready to put down even after being awarded a Guggenheim Fellowship and having “The Hereditary Estate” produced as a book. He plans to use the fellowship grant to continue exploring his family history, which he refers to as “fertile territory.”

“It’s pretty rich," he said. "So I’m interested in continuing to explore these family mythologies that exist. There’s no shortage of materials.”

Coburn is currently an assistant professor of photo media at the University of Kansas. “The Hereditary Estate” is currently on exhibit at the Colorado Photographic Arts Center in Denver.