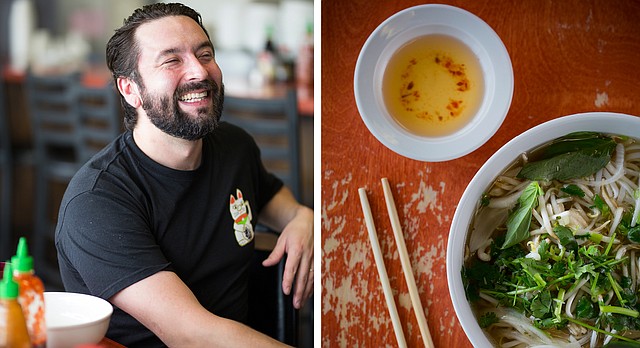 For this month’s edition of Chef’s Choice, Lee Meisel of Leeway Franks decided that Little Saigon Cafe was his spot for pho. Perhaps that's because Little Saigon owners Steve and Anna Nguyen have mastered the classic Vietnamese dish to the same degree that Meisel has mastered sausages and frankfurters.

Pho, as it is, is a soup prepared with rice noodles in broth; a meat, usually chicken or beef; and various herbs and spices. It is traditionally served as an all-day meal in Vietnam. According to Steve, pho began in North Vietnam and migrated to South Vietnam with refugees after World War II. There is considerable debate on the internet about the origins of the meal, but it seems as though most sources — Steve included — believe pho was adapted from the beef stew recipe pot-au-feu, from the French, who colonized Vietnam in the late 1880s.

At Little Saigon, Meisel orders the Nguyens' chicken pho, which is accompanied by noodles, onions, cilantro, sprouts and Thai basil in broth. The broth, Meisel notes, is particularly exceptional, with clear flavors and without any murkiness.

“This is a really simple process that is highly refined through the use of impeccable technique,” he says of the Nguyen’s soup stocks, which are cooked at low temperatures for hours. “(With the stock,) time, temperature, skimming, different processes — it takes a very subtle hand and a very special gift to be able to just execute every single time, and I’ve never had bad soup here. You just get this very distinct flavor of chicken and nothing else.

“The play on texture is really interesting about pho, too. You get little crunchy bits, you get the onion, you (can) get the snap of the jalapeño, you can add different things to it,” he says.

While on the topic of adding things, on the tables at Little Saigon are two bottles: one of hoisin sauce and another of Sriracha sauce, commonly used separately or in tandem for dictating the sweet (hoisin) to spicy (Sriracha) level of your pho, if desired.

“I normally just go straight for it. For me, it’s perfect like this. It’s like this synergy you have in this bowl of this beautiful stock. It’s a complete package,” Meisel says.

For Meisel, the pho at Little Saigon is a comfort food if anything, and he likens its power for combating a wintertime cold to that of matzo ball soup. Beyond the food, Meisel also throws plenty of praise to Steve and Anna, who not only own the small restaurant but are also its sole employees.

“You see their dishwasher? It’s these two. Start to finish, it’s their family, which is what I think is really special about them, too," Meisel said. "When you walk in and see a friendly face and they’re literally giving you your favorite bowl of soup, it becomes your little home away from home."

What a joy to read.... a mashup of my two favorite restaurants in town! My daughters, who live in Seattle have two places that ask to return each time they visit.... Little Saigon and Leeway Franks! Thank you all for making Lawrence spectacular.... friendly AND delicious!