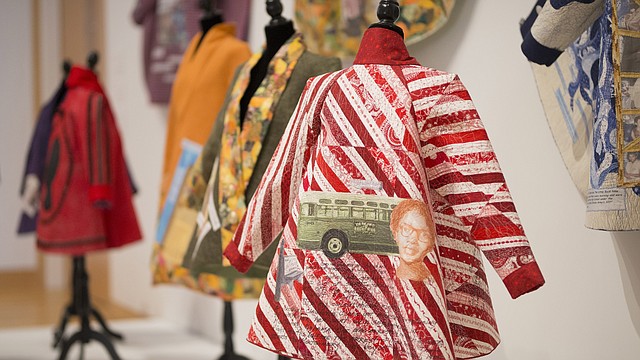 The image of Claudetta Colvin and the story of her contributions to the Civil Rights movement are incorporated in one of eight quilted swing coats from the series "Tributes to Civil Rights Movement Heroines" by artist Patricia A. Montgomery at the Spencer Museum of Art.

Names like Claudetta Colvin, Ella Josephine Baker and Ida Mae Holland don’t jump from the pages of history books with quite the same frequency as those of Rosa Parks or Martin Luther King Jr., but they are featured at a new exhibition about race and culture at the University of Kansas' Spencer Museum of Art.

The exhibition, "Narratives of the Soul," brings together textile art from local and regional artists, as well as work from the Spencer Museum’s collection. It is presented in conjunction with the national touring exhibition of "And Still We Rise: Race, Culture and Visual Conversations."

On the north wall of the central court gallery are eight quilted swing coats from artist Patricia A. Montgomery’s collection, "Tribute to Civil Rights Movement Heroines." Each coat tells the story of an unsung female figure from the era, such as Daisy Bates, who played an integral role in serving as an adviser and facilitator to a group of black high school students known as “The Little Rock Nine,” who were the first to integrate Little Rock Central High School in 1957 amid extreme pressure to do otherwise.

Some of the stories of the women are presented in handwritten, biographical form; others tell their stories through anecdotes and imagery from the civil rights movement incorporated into the various quilted patterns.

“These are specific individuals who had a real impact on the creation of Civil Rights and equal justice for all,” said Susan Earle, curator of European and American Art at the Spencer Museum. “These are real, specific individuals, who made incredible contributions to the creation of equal justice in the civil rights movement, and we don’t always know what they did. I think it’s really important that these stories get told.”

On the west wall is a centerpiece of the exhibition: artist Faith Ringgold’s "Flag Story Quilt," which is an American flag rendered in tie-dyed fabric by Marquetta Johnson. It uses human head profiles to represent the stars of the flag. Within the white stripes, a fictional story is told of Memphis Cooly, who returns from combat in Vietnam a quadriplegic and is accused of the rape and murder of a white woman. 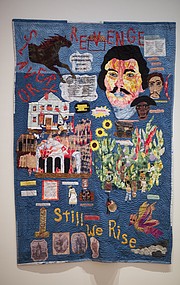 A quilt by Lawrence artist Marla Jackson, "Still We Rise," which depicts the events of and surrounding William Clarke Quantrill's raid of Lawrence on Aug. 21, 1863, was completed along with eight high school students, whom Jackson mentored through the process.

“It’s pretty bold and strong,” Earle said. “She’s going head-on into something that people normally would not alter or mess with. She’s completely humanized the flag. It’s a way of, you could say, kind of reclaiming the U.S. as home and also at the same time implicating some of the mechanism or structures of American society as being part of what would have caused a story like poor Memphis Cooly to have happened.”

Across the gallery from Ringgold’s piece is Lawrence artist Marla Jackson’s "Still We Rise," which depicts the events of Quantrill’s Raid on Lawrence on Aug. 21, 1863. Adjacent to it is NedRa Bonds’ "Separate is Not Equal," which pays tribute to those involved with the landmark Brown v. Board of Education case that led to the integration of public schools.

“This exhibition represents about seven years of putting this together, the imagery in my mind … and the years and years of working on historical quilts from a black perspective,” Jackson said. ”These are tough subjects.”

As far as what viewers will take with them from the exhibition, Jackson has sewn into her quilt a bit of text expressing hope that it will “spark new conversations about race relations.”

Adding to that idea, Earle said, “These artists are just really so gifted at being able to share their experiences, their sense of community, their participations in the difficult histories in this country and at times trying to bring forth a more hopeful kind of a story, but not flinching from the terrible histories that they are trying to address.”

The exhibition will continue through Sept. 17.