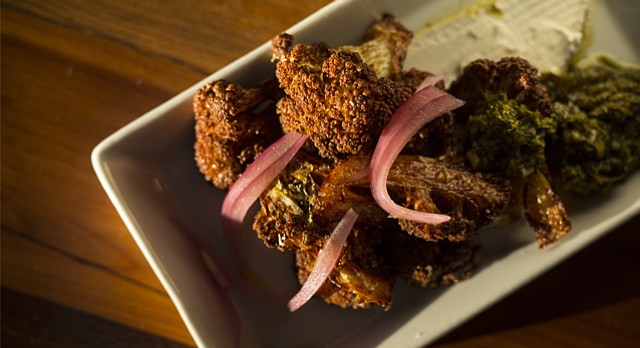 Culinaria's Fried Cauliflower with Labneh, which is a strained yogurt similar to a cream cheese dip.

When Taco Zone owner Brad Shanks opted for visiting Culinaria for this month’s Chef’s Choice, he explained that his affinity for the catering service and Mediterranean restaurant is twofold. First, he said, owners Aaron and Regan Pillar have a similar philosophy to his on how food should be cooked. Second, Culinaria's food was a big part of one of the most important days of Shanks' life — his wedding day.

“That’s how I first tasted Aaron’s food, was when they catered my wedding five years ago, and it was amazing and the same style,” he said. “What I really like about Culinaria is that they have the same idea that I have at Taco Zone ... where all the ingredients are fresh and made from scratch.”

Shanks likens the slow-cooking techniques used in many dishes at Culinaria to “something you would find at your grandma’s house,” with all the love and care that entails.

“It’s really like when you do that slow cooking, you’re able to use all these different ingredients like fresh spices, chilies and peppers, and you’re able to fold those flavors into the different meats, and you really get something big and rich and powerful.”

Aaron and Regan Pillar said they began Culinaria as a catering business in 2009 and just three months ago expanded to a restaurant, which is open Thursdays through Saturdays. Although you can find many traditional Mediterranean dishes and accompaniments on the menu, the Pillars have taken a liking to pairing traditional American dishes with Mediterranean ingredients, as evidenced by their chicken and falafel waffle as well as the pot roast with ras el hanout. Ras el hanout, a North African spice mixture, is Arabic for “top shelf” and is most commonly used in Moroccan cuisine.

“We do a lot of Midwestern dishes and then put a Mediterranean spin on those dishes,” Regan Pillar said. “The reason is that Mediterranean food really lends itself to using fresh vegetables, and the meats are often grilled over charcoal or are fire-roasted.”

On Thursday, Shanks and I met at Culinaria, 512 E. Ninth St., at 3:30 p.m. for a late lunch. One thing I’ve learned from interviewing chefs and restaurant owners over lunch is that you'll often be eating later than usual, because during the normal lunch hours, the chefs are busy tending to their own flocks. In this case, doing so worked out perfectly because it enabled us to try multiple items from Culinaria’s happy hour menu.

Here is some of what we sampled: house hummus and pita bread, made with roasted chickpeas on top of a tahina spread with garlic and lemon; fried cauliflower with labneh, which is a strained yogurt; mozzarella with za’atar, a sesame seed, sumac and thyme mixture; and Moroccan salt-cured and kalamata olives.

Shanks and I also got a preview of the Shabazi wings, which are not on the menu yet. The wings aren’t meant to blow your doors off with heat, but the heat is definitely present, as they are prepared with a dehydrated version of a Middle Eastern hot sauce, schug, a delicious flavor you’re unlikely to find on hot wings elsewhere.

Dubbing the restaurant a Mediterranean kitchen was a liberating experience, Aaron Pillar said, because it allowed him the opportunity to work with a broad range of cuisines.

“We came to the conclusion that it made a lot of sense,” he explains. “You’ve got Italy, Spain, and you’re bordering France as well. It’s just a cool opportunity to not be restricted, because I can make a Turkish dish, a Moroccan dish, a Tunisian dish, and it’s all in this place where we can probably take these things and make them make sense in Lawrence, Kansas.”