2016 Sports Photos of the Year 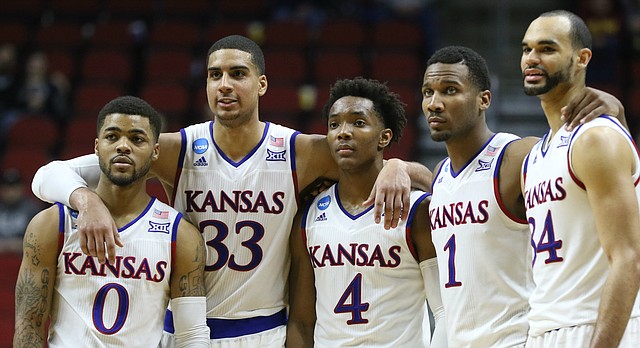 The Kansas starters, Frank Mason III, Landen Lucas, Devonte Graham, Wayne Selden Jr. and Perry Ellis stand arm-in-arm late in the second half as they watch a pair of UConn free throws with the game wrapped up, Saturday, March 19, 2016 at Wells Fargo Arena in Des Moines.

For me, without question, most of the images from the playing field that stand out at the end of each year usually aren't the electrifying dunks or the diving touchdowns. Many of them don't even have a ball anywhere in the photo. I think I speak for most photojournalists when I say that the storytelling moments, whether humorous, melancholy, deflating or uplifting are the ones that most of us are looking for.

But let's face it. Not every win deserves a victory dance and sometimes a game is so lopsided that the losing team has already detached themselves emotionally by halftime. In such cases, I will gladly take an image of a running back hurdling a defender or a bench-clearing, Josh Jackson dunk.

2016 Sports Photos of the Year by Nick Krug by KUsports.com