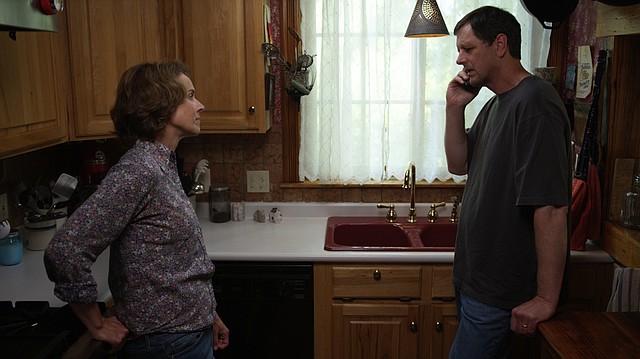 Actors Laura Kirk and her husband Paul Fellers, playing the parts of Marge McMillan and John McMillan, act during the filming of a scene from Stephen and Mary Settle Pruitt's "The Tree."

It’s possible that the 27 years he spent with the Lawrence Police Department served Paul Fellers well when it came to sniffing out acting roles. In the twilight of his career with the LPD, Fellers began moonlighting as an actor and was cast in two different roles, which must have seemed like natural fits. The first was an IRS agent in Kevin Wilmott’s 2014 film “Jayhawkers,” and the second was a detective in Jennifer Nelson’s 2016 film “What We’ve Become.”

Now retired, Fellers has once again found his niche with his most recent role as John McMillan in “The Tree,” a film that will be showing at today’s film festival that is part of the Free State Festival. Fellers’ latest role is larger than his other acting jobs, which might have him understanding why the big actors get the big bucks.

“After that excitement, I got to looking at the script and thought, ‘My word, there is a lot of dialogue here to remember,’” Fellers said.

Directly following the the screening will be a Q&A portion with writers and directors Stephen Pruitt and Mary Settle Pruitt, as well as actors Joicie Appell, Laura Kirk and Paul Fellers.

Luckily for him, practicing his lines was easier with Laura Kirk, the actor cast as Marge McMillan, John McMillan’s wife. Fellers and Kirk didn’t have far to go to practice lines. They’ve been married in real life for five years.

Although he now has an agent, Fellers describes his personal investment in acting as “touching on it,” whereas Kirk has been long entrenched with roles in “American Honey,” currently streaming on Netflix and Amazon, as well as a lead role in “The Sublime and the Beautiful.”

“They came in and auditioned and Laura said specifically, ‘Can I bring my husband in to play opposite me in the audition?’ and I said ‘Sure, that sounds great,’” said Stephen Pruitt, of Overland Park, who wrote and directed the film with his wife, Mary Settle Pruitt. “As soon as I saw them working together, I said, ‘Yeah, these are the ones.’”

“The Tree,” which is billed as a “Kansas film,” is one of the final acts for this year’s Free State Festival. Pruitt tells the story of Dorothy Thorp, an 88-year-old woman, played by Joicie Appell, who makes a decision to drive herself from Wamego to her childhood home of Terre Haute, Ind., to visit her oldest and dearest childhood friend. Fellers and Kirk play the younger couple living next door to her, engaged in debate about their responsibilities as neighbors who are concerned with the well-being of an elderly friend determined to drive herself across several states.

“Marge at this point thinks that they should take the keys away from Dorothy to keep her from going on the trip, but John says ‘No, it’s her life, let her make the best decision for herself,’” Pruitt said. “Their personalities on film are very similar to (Fellers’ and Kirk’s) personalities in life,” he adds, a comparison with which Kirk also agrees.

“I read the script and it just spelled our dynamic,” Kirk said. “Marge is maybe, I would say, a little more hypervigilant and John is more calm and not too worried about what’s happening and more trusting in the natural way that life will work out.”

Pruitt says the McMillans’ on-screen relationship and their back-and-forth debates provide comic relief for the film, which he believes will leave the audience with “a beautiful heartwarming feeling about a desire to be with the people you love.” He also addresses what he calls an “undercurrent about aging and independence” present within it.

“(There is the) conflict between getting older and losing some of your faculties in addition to the other side of it being (the want) to be independent,” said Pruitt, who based the story on the life of his mother, whose maiden name was Dorothy Thorp.

“I moved back here to raise my kids, quite honestly, and also to be here for my parents who are aging,” says Kirk. “Quite frankly, I wish I would have seen a film like this two years ago. In small towns, people do look out for each other. It’s a big responsibility, but it’s also just life. I think ‘The Tree’ has a beautiful way of looking at that.”

Pruitt said the film, which has already been recognized with the Audience Choice Award at the KC Film Festival and Best Feature Film at the Lyons Film Festival, is likely to have a wider audience soon after a distributor is selected.

“I obviously hope to see the film do well,” Fellers said. “Joicee is amazing in it. It was quite an opportunity to be in this film and especially to work with my wife. She’s a tremendous actor and teacher as well.”