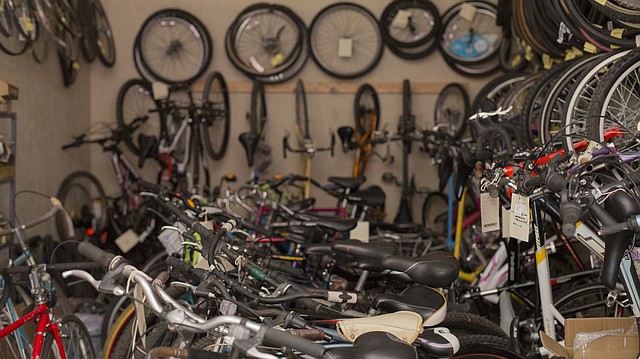 About 60 bicycles are crammed into a 12-by-24-foot studio space at Art Emergency. During workshop nights, Lawrence Unchained organizers pull many of the bikes out into a common space for volunteers to work on and repair.

Lisa Hallberg, cofounder of the Lawrence Unchained Bicycle Co-op, didn’t have to imagine. A fleet of bicycles in her basement ended up being a turning point for the co-op. With space gone, Lawrence Unchained moved out of Hallberg’s basement and into the Art Emergency space at 721 E. Ninth Street. 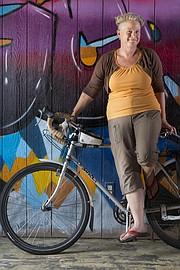 Lisa Hallberg, cofounder of Lawrence Unchained Bicycle Co-op, is pictured on Tuesday, July 18, 2017, at the the nonprofit bike shop's space within Art Emergency, 721 E. Ninth St. Since its inception, Lawrence Unchained has redistributed 113 used or repaired bicycles through a volunteer work-to-earn program.

“As soon as we started word-of-mouth advertising, saying ‘Hey, we’re accepting donated bikes,’ we got a ton of bikes and they ended up in my basement,” said Hallberg, who started Lawrence Unchained out of her basement, garage and driveway in 2014 after being inspired by similar initiatives in Topeka and Kansas City.

That was in April 2015, and the program has been gaining speed since then. To date, Hallberg says the program has redistributed 113 “earned” bikes to happy owners with 10 more used or repaired bikes scheduled for August. And she is quick to politely correct that the bikes are not just given away.

“It’s all about sweat equity,” she says.

Here is how the co-op works. Lawrence Unchained accepts donated bikes and sells repaired ones to pay for renting the Art Emergency space, according to Hallberg. But the gears that keep the machine turning are based on the volunteers. Essentially, anyone interested signs up to volunteer during the Monday night workshops through the Lawrence Unchained website. Once a participant records 10 volunteer hours, they are provided with a bike of their choosing.

“Our goal with having people volunteer and work in the shop is that we’re giving people bikes through their efforts as volunteers and we’re giving them bikes that they’ve hopefully actually worked on a little bit and that they now know even more how to maintain,” she says.

During their weekly two-hour workshops, Hallberg explains, volunteers — mostly high school-aged or adults — usually work two or three to a bike depending on their skill levels, performing various repairs such as replacing tubes, fixing shifters or adjusting brakes. She also points out that although earning a bike may fill a need for some of the participants, she has many volunteers who do it simply for the fun of it.

“A lot of people who volunteer here don’t need bikes,” she says. “They just like working on bikes. In fact, (one) gentleman who came in hasn’t actually taken a bike from the shop but he had a friend who needed a bike so he was using his earned bike hours (for his friend.)”

In addition to the Monday night workshops, Hallberg explains that the Lawrence Unchained board members also work with representatives from the Lawrence and Douglas County Housing Authority and the Lawrence Community Shelter to allow for members of the community who may not have volunteer hours to spare to earn bikes by participating in bike safety tutorials.

Realizing that there is “more demand than there is time,” as she puts it, Hallberg says that as the co-op grows, she would like to see more workshop days in the future. Although “getting more bikes to more people” is a goal of Hallberg’s, she also views her work as steadily working to repair a greater problem with the lack of multi-modal transportation in communities.

“I’ve always been a bicyclist,” Hallberg says. “As someone who cycles nearly every day, I’m really enthusiastic about the idea of fixing that cultural gap where we have stopped bicycling as something that everybody does and everybody feels like anybody should be able to (do) in the street.”

For now, Hallberg has managed to address a need within the community and clear out her basement a little, “having broken (herself) of the desire to have 10 bikes,” she says.

She’s now down to just three.