Artist Anson DeOrnery makes viewers a part of his work 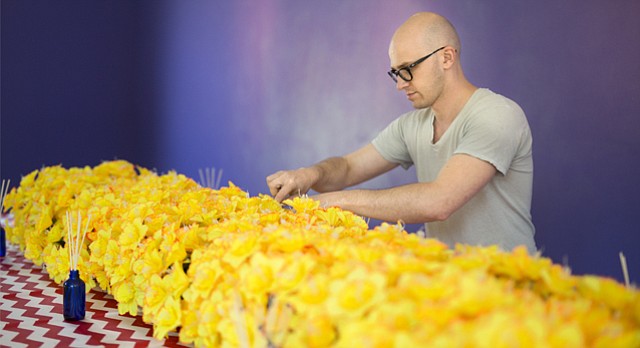 Artist Anson DeOrnery, who goes by the artist name Anson the Ornery, arranges daffodils for his installation Deluge, which runs through Sept. 9 at the Lawrence Arts Center, 940 New Hampshire St.

Not many artists readily admit that their intention with their work is to disappoint the viewer. Anson DeOrnery, who goes by the artist name Anson The Ornery, on the other hand, has a show at the Lawrence Arts Center titled "Deluge," which is, well, kind of a bummer the more it is explored. According to the artist, that’s precisely the point.

"Deluge" is a site-specific installation that can be viewed from an outside-the-glass vantage point, such as that of the Lawrence Arts Center’s front gallery, as well as from within the space itself to provide two distinct and separate impressions of the work. According to DeOrnery, the installation will also involve sound and smell, along with daffodils and ten pounds of feathers.

“The idea is a critique on social media,” says DeOrnery, who uses the outside perspective to create a beautiful and enticing scene, representing a utopian portrayal of our lives as sometimes broadcast through Facebook and other forms of social media. Once the viewer is within the space, however, it’s clear that DeOrnery has lifted the facade of beauty and, without giving too much away, the viewer is left to explore the true reality of the scene firsthand.

“Basically when a viewer comes by and approaches the gallery, it’s very beautiful from the outside. When you enter the space, you’re inundated with a sensation,” says DeOrnery. “It’s just an overwhelming of your senses. So the idea behind that, with social media is there’s the fear of missing out,” he says. “... But really, when you examine people’s lives, (they’re) not really that exciting.”

DeOrnery believes "Deluge" will create a choice for the viewer: to continue experiencing the work despite the wave of sensation, or to simply leave. Giving viewers the freedom to choose how or whether they will interact with the work is a common theme throughout his installations and even his paintings. DeOrnery, who also owns an art handling business based in Kansas City, understands the value of treating art with professional care, but doesn’t always require the same delicate approach for those viewing his work as seen with his 2013 exhibition "Plz! Despoil My Art."

Anson DeOrnery's "Plz! Despoil My Art" is pictured before (left) and after viewers were allowed to deface it.

On his website, he shares a YouTube video of viewers in a gallery destroying a watercolor self-portrait. Throughout the process, the work is altered and even attacked by way of markers, glue, paint and other materials made readily available on a table nearby. At one point, a viewer even makes a flying leap at the portrait to imprint paint from the bottom of his shoe. Another viewer appears to spit wine at the painting.

"Deluge," like most of DeOrnery’s work, does not invite destructive interaction. So, basically, you’re not supposed to touch the daffodils. Most of his works do, however, submit some form of creative control to the viewer.

“It is exciting to see what people will do, and you’re always surprised. A lot of my work has a thesis, or a comment or statement about something. When people are able to interact or be a part of it, I think they understand that concept a little bit better.”

“Anytime you put something in public, you lose control of it. If you put work out and people rally around it for another reason, you kind of have to acknowledge it,” he says.

" Deluge" is on display at the Lawrence Arts Center until September 9.