A Chef's Choice tour at Bon Bon! and a healthy dose of 'buns' 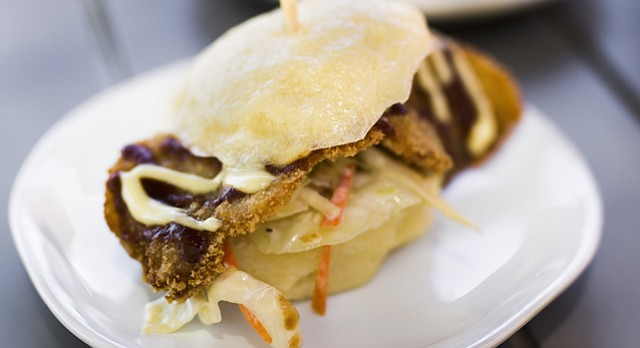 For this month’s edition of Chef’s Choice, T.K. Peterson, owner/chef of Merchants Pub and Plate decided that traveling to the “Far East” was a must for eating Katsu Buns. Happy to oblige, I booked my travel, packed my bags and journeyed to far East Lawrence, to eat my “Buns” off at Bon Bon!, 804 E. Pennsylvania Street.

For those who may not know what “bun” is, it’s not the same thing as the vessel used for carrying the colorful contents of a Chicago Dog. That was a few weeks back with Limestone Pizza Chef Rick Martin and Leeway Franks. Not totally unlike a hot dog bun, however, this kind of bun or bao, as it is referred to in China, is essentially a steamed dough made from yeast, sugar and flour that traditionally envelopes various meats, vegetables and spices.

Also like the hot dog, bun is a type of meal that is primed for plenty of culinary adaptations. At Bon Bon!, the Katsu Bun is served sandwich style with the interior ingredients listed as being crispy pork loin, kewpie mayo, Japanese barbecue sauce and slaw.

Kewpie mayo (had to look it up) is a specific brand of Japanese mayo with a kewpie doll on it’s bottle that is made with egg yolks in the place of whole eggs and rice wine vinegar instead of distilled white vinegar. Bon Bon! owner Simon Bates said that they have created their own version of the wildly popular, Japanese mayo brand as well as their own in-house, Japanese barbecue sauce.

For Peterson, the allure of the bun at Bon Bon! is clearly the taste and the texture of their menu items, but it’s also the creative approach that Bates and Bon Bon! have taken while experimenting with the traditional Chinese meal.

“It’s the kind of food that I like to eat,” said Peterson. “It’s a lighter form of cuisine than French and Italian food can be. When you come here all of the food is really bright and light and that definitely translates to a sandwich really well.”

“Even if you’re not really hungry, when you’re here having a drink, it’s really hard not to get a bun,” he adds.

Although we set out to only talk about the Katsu Bun, we ended up ordering their other two “Bunz” listed on the menu, the Hot Chicken bun and the Vietnamese-inspired Bon Bun Mi, which is spicy Vietnamese pork loin, as well as their current specialty bun, which comes with Korean Smoked Brisket. Because they’re light, as Peterson points out, a hungry eater would probably want two.

For myself, the experience was definitely similar to the appeal of ordering various rolls of sushi for not only the mixing and matching aspect, but also for the various flavors and textures that you can get from one bun to the next.

“I really fell in love with what they’re doing as far as the style of food,” said Peterson. “If you go on Bon Appetit or Epicurious or Food and Wine (websites), three quarters of the recipes that you’re looking at have some sort of Asian inspirations behind them. It just really is what people are finding fascinating and interesting. People are really focused in on those eastern flavors. They took Asian flavors to a new level in this town.”