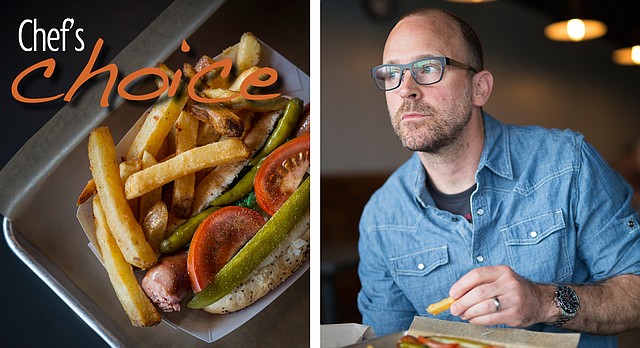 For the first installment of Chef’s Choice, I met with chef-owner Rick Martin of Limestone Pizza, 814 Massachusetts St., and invited him to a lunch at any restaurant in town other than his own. His choice: the Chicago dog at Leeway Franks.

Martin explained that for him, the old American standard hot dog and its dressed-up Chi-Town counterpart carry a sense of nostalgia from growing up poor as a child in Wichita, and also trips to visit his brother in the Windy City as an adult.

“I ate a million hot dogs as a kid, whether it be on a bun or sliced between white bread. Whatever it took to get a little food,” he said.

“Going to Chicago and eating that Chicago dog underneath the train tracks on Damen (Avenue) with my brother and seeing how it was different — the snap of the casing of the frank, the different flavorings and that neon green relish — those are the experiences that I love,” Martin said. “It’s all about traveling and tasting different things. I don’t care how exotic it is; a hot dog really embodies a lot of those things.” 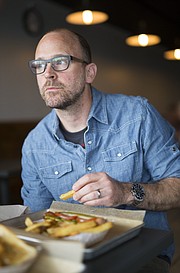 At Leeway Franks, 935 Iowa St., the Chicago dog is an all-beef frankfurter that is only visible if looking at the ends of the bun because on its top it is completely covered in a dog pile of diced onions, a pickle spear, tomato slices, sport peppers, yellow mustard, green relish, all on a poppy seed bun and topped with celery salt.

I should add that although there was ketchup on the table, it was for the fries and tots only, because everyone knows slathering a Chicago dog with anything other than yellow mustard or relish is probably going to get you yelled at.

For Martin, the appreciation for Leeway version of the Chicago dog is a threefold explanation. The first noteworthy item he mentions is what he refers to as “the snap” that the franks at Leeway have.

“It’s the first telltale sign that it’s legit, if it’s in a true casing (and it’s) all-natural; it’s going to have that snappy crunch when you bite into it," he said. "We’ve come to not expect that from a hot dog because we’ve mechanized and industrialized it to the point where it’s just kind of a soft mush.”

Secondly, there’s the dog-to-soft-bun ratio, which Martin says works very well for containing the dog and its hearty accompanying condiments as a street food item, originally designed to be eaten while walking. 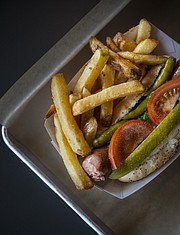 “It’s different for every street sandwich," he said. "Understanding that ratio is what makes a good sandwich a great sandwich.”

Lastly, he notes the differentiation from one bite to the next and how the variety of vegetables and condiments makes the Chicago dog successful.

“(Each bite) opens different sensory receptors,” he said. “It’s like this crazy salad on a bun. It’s great.”

Martin’s compliments for Leeway Franks don’t start and stop with the first and last bites of the Chicago dog. With the food mostly gone, he had plenty of praise to throw their way concerning the choice to use local and all-natural products, two characteristics he stresses to students in his food preparation and restaurant sustainability classes at Flint Hills Technical College in Emporia.

“Those are the little things that could flip our food system to be right again very quick,” he said. “If we can shrink our food system, make it smaller and know where it came from, you’re not only improving your health, you’re taking millions of gallons of diesel fuel off of your food and you’re adding to it what you want, cooking from whole ingredients.”

Absolutely delicious, had no idea one could get som much flavor from a frank.