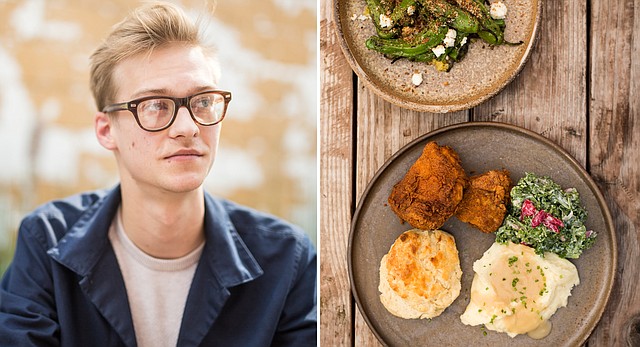 Just when you thought you’d finished that 800-page novel on fried chicken restaurants in Lawrence, Reagan Petrehn, co-owner of 1900 Barker Cafe and Bakery, decided to write a new page with a visit to an unexpected restaurant. This month for Chef's Choice, we travel to Hank Charcuterie, for — yes — fried chicken.

Although much of the menu is dedicated to smoked meats, cured meats, cheeses and various pickled vegetables, Wednesday is the day of the week when the charcuterie really gets its deep fryers going. Even though the restaurant offers fried chicken only once a week, Petrehn’s recommendation is a bold one.

“Don’t sleep on their fried chicken. This is everything that you want (it) to be. It’s the best in town,” he says.

According to Hank Charcuterie chef and owner Vaughn Good, the organic, free-range chicken comes from Gerber Farms in Iowa. It is currently served with horseradish-laced mashed potatoes and gravy, a homemade buttermilk biscuit and a local kale salad with a buttermilk and sheep’s milk yogurt dressing.

For Petrehn, Good’s fried chicken goes beyond a hearty and feel-good meal at the end of a long workday.

I don't recall any fond childhood memories of eating fried chicken, but that's probably just because any fried chicken prepared in my family wasn't any good or was way too greasy. Good's chicken, however, is tender and crispy, and it makes me think I got robbed of beautiful childhood fried chicken memories.

Apparently, the charcuterie's chicken is really good for an affliction many of us may suffer from time to time: relieving a caffeine buzz. Petrehn should know. He is the coffee and drink specialist at his own establishment.

“We do coffee and because we’re in the business of doing it really well, we taste it all the time, which means that one of the cruxes of that world is that you’re constantly over-caffeinated,” he says. “Nothing is better for that than fried chicken and a Coors. It’s like medicine.”

Petrehn's admiration of Good goes beyond the food. He credits Good and his restaurant with providing some of the inspiration for him and his brother, Taylor, to start their own bakery and cafe two years ago.

“We’ve been fans (of Hank) since before we opened,” he says. “It gave us super good vibes; seeing that they were here and seeing that the community liked having them here was huge. You don’t quite know how the community is going to handle you, and we got to see that they appreciated a restaurant already with Hank.”