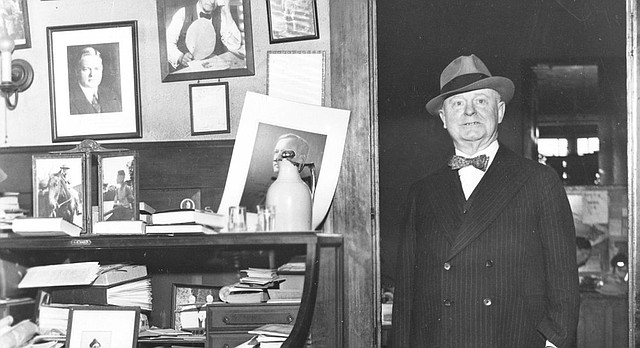 With the release of his new documentary, “William Allen White: What’s the Matter with Kansas?”, on the 150th anniversary of White’s birth year, Willmott explores the life and legacy of the famed “Sage of Emporia,” and draws parallels between our current political climate and the nation’s struggles that White so famously wrote about during his day.

Willmott, who is best known for writing and directing "C.S.A.: Confederate States of America" and "Jayhawkers," which he wrote with producer Scott Richardson, got on board with the White documentary after Richardson was approached by members of the William Allen White Foundation, including Dave Seaton, who is among the trustees of the foundation and chairman of the board of the Winfield Publishing Company.

Seaton said it was about three years ago that he sat down with Willmott and Richardson about creating the film, which he sees as a means for preserving the legacy of a figure who might not be as well-known as other famous Kansans.

“I find that even with (other journalists), whom I thought might be acquainted with White, some even in Kansas, don’t even recognize the name,” Seaton said. “His memory has faded a lot."

“There’s a big sign outside of Emporia that says ‘Home of William Allen White,’ and I bet there are a lot of folks in Emporia who don’t really know who he is,” Willmott added. “So we hope the film will help to respond to some of those issues.”

For Willmott, whose work frequently addresses race relations, it was White’s progressive attitude toward civil rights that captivated him.

“I think what I love about him the most is that he ran the Ku Klux Klan out of Kansas in the 1920s,” he explained. “The Klan had basically taken over Kansas and they had taken over much of the country at the time. (White) specifically ran for governor (in 1924) to run the Klan out of the state and he achieved that.”

“The idea of civil liberties and the First Amendment, he was really right in the middle of those issues in the 1920s when those notions became connected to journalism,” Willmott said. “Even when those notions became values that Americans wanted to really fight (for) and hold on to, he was really one of the ones that really connected the First Amendment and civil liberties to journalism.

Willmott pointed out that during White’s era, the country saw the deportation of foreign-born radicals and the arrests of draft resisters in addition to many others who were outspoken in opposition to the United States' involvement in World War I and other matters. White himself was actually arrested in 1922 while defending railroad workers on strike. The following year, White won the Pulitzer Prize for famously defending free speech with his editorial “To an Anxious Friend.”

Willmott said there was a lot about those struggles that people can identify with today.

“What I think you typically do is you have to look toward the conflict and put him in a more modern context,” Willmott said. “Younger people, especially, can relate to him in terms of the values and the fights that he had and how they connect to today and how we can learn from his life. The things and issues and problems that we are dealing with today, White was dealing with those problems in his time. He has a lot to say to us today.”

A screening of Willmott’s film will take place at 5:30 p.m. on April 25 in 3139 Wescoe Hall. The screening is free and open to the public. In addition to the full-length feature, a shortened version of “William Allen White: What’s the Matter with Kansas?” has also been created and will be used for educational purposes.