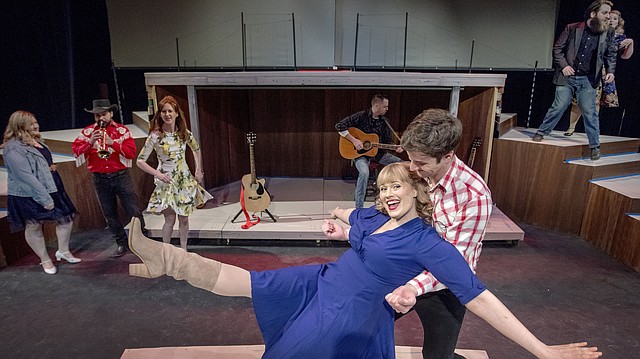 With its production of the musical "Ring of Fire," Theatre Lawrence will tell the life story of the country, rock and gospel musician known as the Man in Black.

“I’ve always loved Johnny Cash, so the idea appealed to me right away,” director Ric Averill said on the topic of being approached about the musical by Theatre Lawrence executive director Mary Doveton. “It’s a musical where the musicians are on stage and are really a part of everything.”

What theatergoers might find interesting about this portrayal versus many other musicals is that although there is bridge dialogue, the story is told largely through Cash’s music.

In addition to the seven-piece, on-stage band, which Averill himself will be leading on the piano, the musical has seven principal roles, three of which are Johnny Cash in various stages of life. All of these iterations of the music legend make their entrances with his trademark introduction: “Hello, I’m Johnny Cash.”

Ryan Nichols performs the trumpet on the song “Ring of Fire” during a rehearsal of Theatre Lawrence’s production of “Ring of Fire." The show opens March 2.

A bit like a four-movement symphony, "Ring of Fire" breaks up Cash’s life into four distinct musical sections.

“The first section is very much songs of Johnny’s childhood (and) trying to pound out a life in the hard-scrabble Arkansas mud (with) the floods and the death of his brother,” Averill said.

In the second section, the audience is taken to the Grand Ole Opry, where we see the introduction of June Carter Cash and the duet “Jackson.”

“After intermission, it’s the phase that we call the prison phase,” Averill said. “It’s the songs about criminals, prison and being in touch with people of the earth.”

Finally, Averill and the cast put a bow on their portrayal with a tribute section including songs like “A Boy Named Sue” and “Tear-stained Letter.” Averill notes that local listeners, if they’re paying attention, might catch a surprise during the performance of “I’ve Been Everywhere.”

“The musicians and singers are just wonderful, he says. “We’re a community theater, but we have very strong concert voices and the harmonies are exquisite. They just nail them.”

"Ring of Fire" opens March 2 and runs though March 11, with most showtimes beginning at 7:30 p.m. Sunday performances will begin at 2:30 p.m.. A full list of showtimes and ticket information is available on Theatre Lawrence's website.