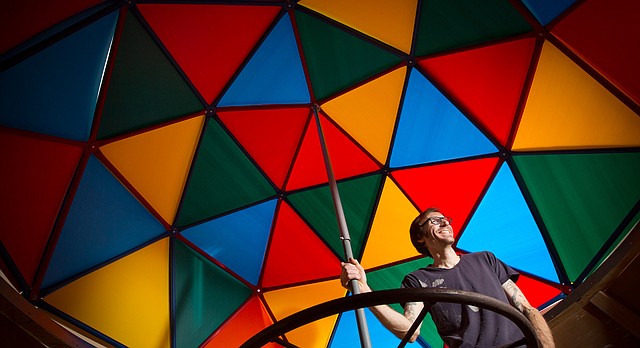 Lawrence artist Justin Marable is pictured within the Peacemaker 1, a time capsule he designed as part of his "Time-Shift Paradox" installation at the Lawrence Arts Center. The exhibition will open on Jan. 12, and it explores the topic of time travel and changing destructive historical in hopes of a more sustainable future.

The solo exhibition currently under construction at the Lawrence Arts Center will feature artist Justin Marable, whose name many will recognize from his work in screen printing.

But for this exhibition, which Marable describes as “a pretty big departure” from his past work, he has gone full 3-D with an immersive installation titled "Time-Shift Paradox," which fills all three main-level gallery spaces at the Arts Center.

The installation tells the story of the fictitious “artistic activist” Dakota Aquene, his daughter Amitola and a team of Kansas scientists, who are in hiding from government forces determined to steal the secrets of their “time-shift paradox” theory. The titular discovery enables time travel, and consequently allows the team to avert catastrophes by going back in time and altering key historical events.

Although visitors can't meet the cast in person, their story is told through a tour of their hideout, headquarters, labs and even their time-travel capsule, the Peacemaker 1. Hints as to which historical events the activists have interrupted or plan to target are in full view, appearing as relics and trophies within a glass case. One such piece is an intercepted letter from Albert Einstein to Franklin Delano Roosevelt that could have marked the birth of the Manhattan Project, atomic power and eventually, atomic weapons. 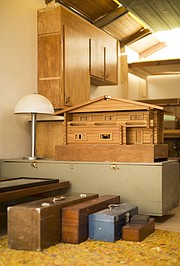 With "Time-Shift Paradox," artist Justin Marable has created a story about a group of "artistic activists," who are in hiding from government spies determined to steal the secrets of their time travel theory. Displayed is a portion of the characters' living quarters within their bunker.

Marable said he began planning the installation about two years ago, but the evolution of the project “changed dramatically after the (2016 presidential) election.”

“This show was inspired by that utter need to change something,” says Marable. “This was a reaction to more of the systemic problems that exist. So, (I thought,) what kind of narrative can I come up with that is fun but will still speak to those deeper-level issues?”

On the surface, talk of a dystopian, post-apocalyptic existence doesn’t sound fun or uplifting, but Marable makes sure to inject a sense of hope with two alternate futures he showcases at the end of the installation.

Fitting within his broader theme — the need for a sustainable future — Marable has constructed the vast majority of the installation with reclaimed, recycled and borrowed materials. This method runs parallel to the survivalist tactics his characters employ, he said.

“I did a ton of dumpster diving ... and collecting from other people,” he explains. “For me, the idea of repurposing materials stemmed from sustainability and (the fictional activists) utilizing material that already exists in the world.”

Marable’s imagination is on full display throughout the "Time-Shift Paradox" experience, but especially within the Peacemaker 1 capsule, which many will recognize as a playground climbing structure fitted with colorful panes of corrugated plastic. That use of familiar elements is intentional, Marable said.

“I think it will be interesting for people to see these materials that they have had an experience with in some way completely turned upside down or on its head,” Marable said.

“This is off the charts for (Marable),” Ahlvers said. “It will be neat to watch people who might be expecting the Marable that we’ve seen before — to see how they let go or engage with it.”

The opening reception for the exhibition will be Friday, and the show will run through Feb. 24.

Nice piece on the activists, Love it.