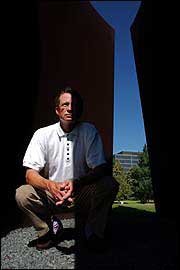 Don McNeil, curator for General Mills, kneels inside a large steel
sculpture on the grounds of the company's headquarters, background,
in Golden Valley, Minn. McNeil has overseen the corporate
collection for 27 years. The sculpture by Richard Serra is titled
"Core."

Legend has it that in 1958, when General Mills moved into its new headquarters, Charlie Bell, who was then the company's president, took a look around and said, "It's too gray in here. We've got to do something to enliven this building."