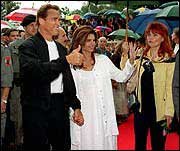 Austria-born actor Arnold Schwarzenegger and his wife, Maria
Shriver, arrive for the German language premiere of his movie
"Batman &amp; Robin" in Graz, Austria, in this June 20, 1997, file
photo. Schwarzenegger has become a national obsession as
speculation swirled on whether he might run for governor of
California. An adviser said Monday that the actor was leaning
against running in the recall election of Gov. Gray Davis.

It's a question that's got Austria abuzz: Will the Terminator become the Governator?