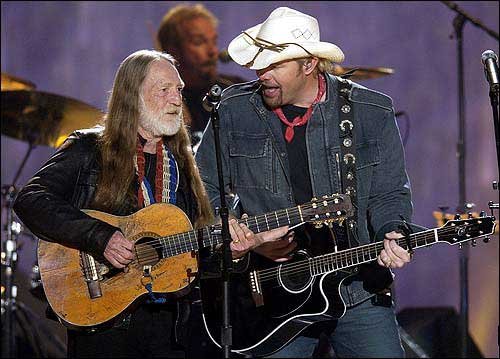 Willie Nelson, left, joins Toby Keith as they sing "Beer for My
Horses" during the 38th annual Academy of Country Music Awards on
May 21 in Las Vegas. The nominees for the Country Music Assn.
Awards -- to be held Wednesday -- reflect a shift from pop-leaning
crossover females to the more male-dominated traditional country.
Keith leads all performers with seven nominations, and country
legend Nelson has several nominations.

The nominees for this week's country music awards are a bit more old school than some predecessors -- and a lot more brawny. For the first time in some 20 years, male singers took all five slots in both the entertainer of the year and newcomer categories.