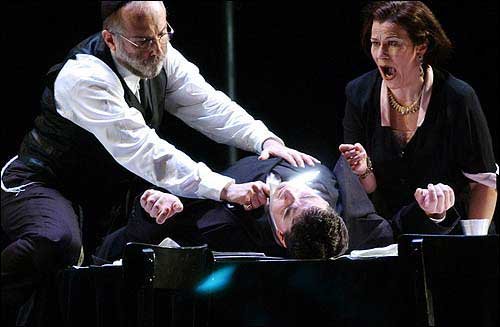 Neil Shicoff, left, as Eleazar, a Jewish goldsmith, holds a knife
to the throat of Eric Cutler, as Prince Leopold, while Rachel, his
daughter, played by Finnish soprano Soile Isokoski, sings during a
rehearsal of Fromental Halevy's "La Juive" at the Metropolitan
Opera in New York City.

Famous opera falls back into favor

Banished from its stage for 68 seasons as an outmoded relic of a bygone era, Fromental Halevy's "La Juive" has returned to the Metropolitan Opera, as timely as fanaticism and religious hatred.