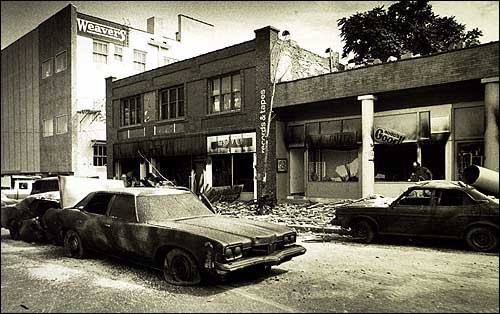 The TV movie "The Day After," which aired 20 years ago this week,
portrayed the destructive result of a nuclear attack on Lawrence.
In this downtown scene west of the intersection of Ninth and
Massachusetts streets, Weaver's Department Store is visible at far
left.

Fallout from 'The Day After'

On Nov. 20, 1983, Lawrence endured fallout from the blasts of nuclear missiles that struck neighboring Kansas City. The area was scorched by firestorms, citizens were vaporized, and those lucky enough to survive suffered the slower effects of radiation poisoning. At least that is what was portrayed in an ABC television movie that became one of the most watched and most controversial events of the decade.