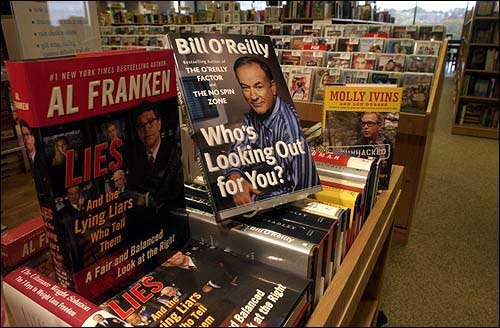 Liberally slanted titles are selling better than more conservative
books across the nation, including Lawrence. Al Franken, author of
"Lies and the Lying Liars Who Tell Them: A Fair and Balanced Look
at the Right," is the best-selling author at Oread Books with 18
copies whereas more conservative author Bill O'Reilly, as of
Thursday, had sold only three books.

The lefties may be losing at the polls, but they are winning on the best seller lists. "I think there is an increasing groundswell of anger among non-Bush fans," said Ruth Lichtwardt, assistant book buyer at Oread Books, which is on level two of the Kansas Union.