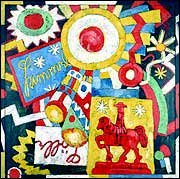 "Himmel" and the other works will be on exhibit at the
Nelson-Atkins Museum of Art during the retrospective "Marsden
Hartley (1877-1943): American Painter." The show opens Saturday at
the museum and continues through Jan. 4. "Himmel" is part of the
museum's permanent collection.

The painter from Maine. There's something a bit misleading about the nickname Marsden Hartley bestowed upon himself at the end of his career. The 20th century American painter spent more time in Paris, Berlin, New York, Mexico, Bermuda and elsewhere than the placid Northeast state where he was born in 1877 to immigrant parents. But he returned there late in life and even incorporated the state's rugged landscapes into his work.