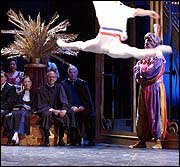 U.S. Supreme Court Justices Ruth Bader Ginsburg, Stephen Breyer,
center, and Anthony M. Kennedy watch a ballet dancer as they play
the roles of themselves in the Washington Opera's production of
"Die Fledermaus" at DAR Constitution Hall in Washington.

Anthony Kennedy likes to listen to the opera while working, Ruth Bader Ginsburg dreamed of a career as a diva, and Stephen Breyer has twice performed on stage -- albeit a half-century ago.