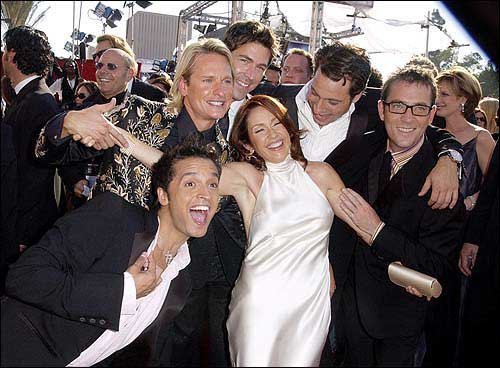 Actress Patricia Heaton clowns with the stars of "Queer Eye for the
Straight Guy" as she arrives at the 55th Annual Primetime Emmy
Awards at the Shrine Auditorium in Los Angeles. Heaton stars in
"Everybody Loves Raymond," which won Best Comedy at Sunday's
awards. With Heaton, from bottom left, are Jai Rodriguez, Carson
Kressley, Kyan Douglas, Thom Filicia, and Ted Allen.

NBC's "The West Wing," despite shrinking viewership, took the Emmy for best drama Sunday, and CBS' "Everybody Loves Raymond" for best comedy.