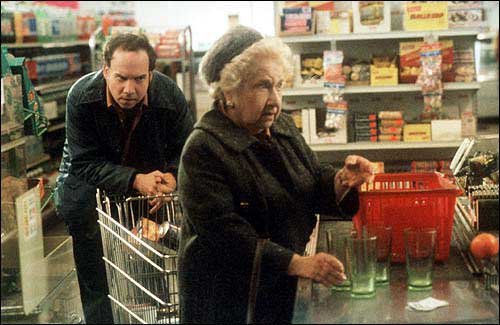 Paul Giamatti, left, portrays Harvey Pekar, whose mundane life was
turned into a long-running comic book series. In this scene from
"American Splendor," he gets trapped in line behind a demanding
customer (Sylvia Kauders).

Before the Internet helped facilitate the idea of granting everyday people a widely available soapbox to vent their frustrations, Harvey Pekar was quite a novelty. The scraggly haired, hoarse-voiced, divorced loner worked a mundane job as a file clerk at the Veterans Affairs hospital in Cleveland. With an intense gaze that actually proved more observational than hostile, Pekar achieved a certain Zen mastery of cynical wallowing.