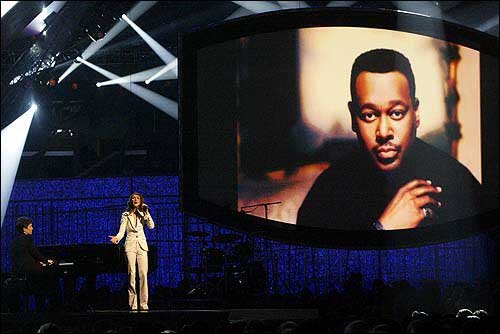 Celine Dion is accompanied by Richard Marx on the piano in a
tribute to Luther Vandross (onscreen) during the 46th annual Grammy
Awards in Los Angeles. CBS used a five-minute broadcast delay
through Sunday's award show to avoid the nudity scandal that
plagued the Super Bowl halftime show the week before.

Balladeer Luther Vandross, recovering from a stroke, won four Grammys on Sunday including song of the year for "Dance With My Father," and Beyonce earned a record-tying five honors. OutKast won album of the year for "SpeakerBoxxx/The Love Below" in a ceremony televised by CBS on a five-minute delay to avoid anything like Janet Jackson's Super Bowl flesh flash.