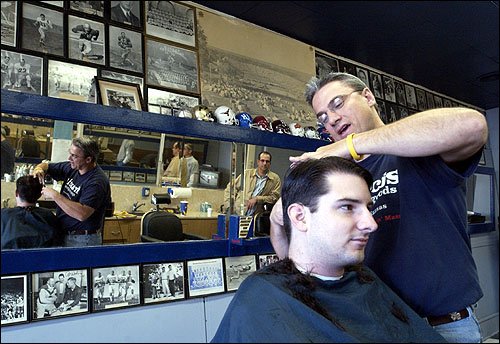 Rex Porter cuts the hair of customer Keiv Spare, a Kansas University senior from Parsons, at Rex's Stadium Barber Shop, 1033 Mass. Rex bought the longtime RC's Stadium Barber Shop after being a barber at Downtown Barber Shop for 17 years. Porter said Friday that he originally wanted to remodel the wall featuring pictures of local athletes, but since had decided leave it alone.

Outside of what used to be RC's Stadium Barber Shop, two men slowly lower the old RC's sign out front, pin it under their arms and cart the wooden plank out to a Dumpster in the alley. On their way, they pass Rex Porter, the shop's new owner. And, of course, the place has taken on his name.