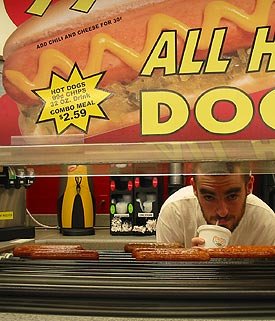 Jordan Geiger, former Kwikee Mart employee. "(Kroger) sent us
probably 50 to 100 giant Big Gulp cups that had 'K-State' on them
... and the Kwik Shop that I work at is literally two blocks from
the football stadium ... I hate Kroger. I hate them to the very
depths of my soul."