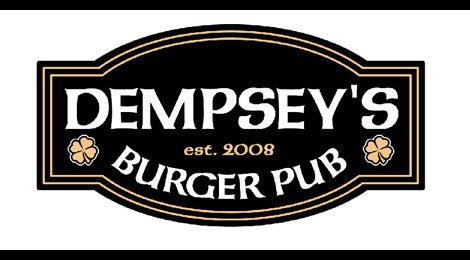 On the menu: A burger topped with fried egg, bacon and Gruyere cheese, as well as a peppercorn medley encrusted burger with Bordelaise sauce and House mustard on a bed of fresh Arugula.

The restaurant also brags about it's local ingredients including local beef, tomatoes from Irick Farms of Linwood, and honey from Anthony's Beehives of Lawrence, plus others.

Dempsey's is a great place to get burgers and to sit outside on their huge porches and enjoy weather. The staff is nice, polite and fairly quick. The beer selection is pretty good too. The only thing that I didn't like is the amount of alcohol they put into mixed drinks. Double whiskey coke...Mostly coke. Double vodka cranberry = cranberry juice. Oh well, good times still.

The sad news is that, since the "divorce" between The Burger Stand and Dempsey's in 2010, both places are not as good separate as they were when they were one. I had them when it was all one operation in Dempsey's and it was great, but in several visits to both places since the split, neither is as good as they once were.

Dempsey's has the BEST vegetarian, quinoa burger in town!! Soooooo much flavor, with a touch of fresh ginger!!

finally got to try Dempsey's and it was great. we will definitely be going back. the burgers are awesome, truffle fries and duck fat fries are addictive. even though they were packed, our food was prepared very quickly and the employees were very friendly. im a fan of places that choose to do one thing and do it really well. and Dempsey's does!

My wife and I went to Dempsey’s tonight for dinner and were greatly disappointed.

We really looked forward to the “Classic” and lentil burgers based on the high praise they received in the reviews in Lawrence.com. Additionally, we were anxious to try the French fried sweet potato, also highly praised.

There was nothing “classic” about the burger. It was about one-third of a pound of tasteless grease covered with a slice of Vermont cheddar cheese, which added nothing. Onion, lettuce, and tomato were not options nor offered unlike the classic burgers of the 40’s and 50’s. Finally, both burgers were excessively salty. It is no exaggeration to say Sonic and Wendy’s serve better burgers.

The sweet potato was coated with cinnamon which we I found unpleasant and weird.

The flavor of the pickles served with each burger was odd, at best.

Neither of us ate more than half of our burgers and left the remains on the table.

We will return, however, to try the falafel burger

The beer selection is terrific.

Two words: Kobe Burger! I'd never eat another hamburger if I could afford this all the time. It's a delicious burger, packed full of flavor & so rich it doesn't even need cheese. It's kind of a gut-bomb, (especially if you get some of their specialty fries to go with it) so bring your appetite! Honestly, I'm glad I can only afford a $9.00 burger on occasion, because I'd probably put on an extra fifty pounds if I could eat here more often.

What is happening Dempsey's? Usually restaurants start bad and get better, you all started amazing and the fire is dying!

Did you change meats or something? The last 2 burgers I had tasted like the ones I got from the cafeteria in 3rd grade and that is SO uncharacteristic of the quality I'd had in the past. I usually love everything, but stuff ain't so great nowadays. I hope it turns around.

We ate at Dempsey's tonight, I have never been there before and have heard great reviews about this place, so we decided to try it out. After taking a few bites of my burger I noticed that the inside of it was falling out due to it not being cooked at all. It was so raw that blood was dripping out of it. Now don't get me wrong I love Medium cooked meat, but this was way too much for me to handle. After showing the burger to the guy at the bar, he didn't even care. Seriously, you're going to be another failed business if you don't listen to what customers want. Enjoy my money, you obviously needed it more than me.

the lentil burger was freaking amazing.. i also love their sweet potato fries.. I'm planning my next trip soon!!!!

After eating the Kobe burger from The Burger Stand in Dempsey's, I will never order another burger anywhere but HERE! It was knock-your-socks-off FANTASTIC! Between the top-quality, fresh-ground kobe beef, the marinated onions, and the truffle sauce...it was a marriage of flavors unparallelled by any other meal I've ever had. I found myself sorry when the burger-eating ended. Despite it's generous size and my full stomach; I wanted more! The additional $2 for sweet potato fries was well worth it. Best $11 I've ever spent on a meal!

The falafel burger is the best veggie burger I've ever had. My carnivore husband said his burger blew his mind. Loved the truffle fries too! It's laid back and they have porch outside so you can smoke and drink if that's your thing. Yeah, it's a little on the pricey side, but I've never been to a place where people cheer when the bartender tells you your order is up, so it's well worth it.

Great eats! The sweet potato fries are great and come with three homemade sauces. I like variety in what I dip fried goodness into. $3 dollar guinness on tap a couple nights a week - fantastic. Come on lawrence let's keep this place open.

The falafel burger is A-MAZING!

Had dinner at Dempsey's last night - burgers were awesome - one of the few places in town you can request AND GET a medium rare burger. Buns are good quality, though the lower bun is a bit weak for that substantial a burger. My other half had the chili burger and I had the Kobe burger, we had truffle fries and a Strongbow. Dinner was $23 - the burgers are good priced for the amazing quality (range from $5 to $8 I think). If I could get hard cider on tap this would be my new favorite place. Food service is at the back end of the counter.

We went to Dempsey's tonight for dinner. We found out that Robert Krause is making the burgers there, well, one of their chefs Simon made them. Our burgers were SOOOOOOOOOOOOOOO delicious! I had the Falafel burger and my husband had the chili burger. I cannot even begin to describe how amazing they were. We also order the truffle fries. We will definitely be going back very soon. I would recommend this place to everyone.