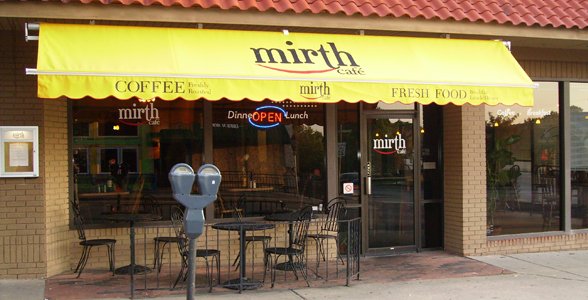 I amend my statements. It was over 5 years ago and i don't believe that's true anymore.

Raider 12 years, 4 months ago on Mirth

This place has gone down hill. Used to eat breakfast there probably once a month. Went in last Friday with a friend to have breakfast. The waitress was terrible. She brought the wrong food, and when asked about it she just giggled and said that everyone makes mistakes. Didn't offer to correct it. Biscuits were like bricks as well. Food was not up to the normal quality.

Back to the waitress... very apathetic. Poorly dressed with shorts way too short, tattoos showing everywhere. I took my ticket to the counter to pay (b/c she didn't come around to take it from me) and she had the nerve to chastise me for it. Said to me that "for future refeence you pay at the table". She was an absolute slag. THEN, what's worse... it's obvious that the two of us were paying seperate as we handed her two cards. She put the whole bill on my card. Didn't seperate it or do anything.

We won't be going back. And to top it off, I called back and left a message for the owner Robert to call me. It's the following Wednesday and I still haven't gotten a call. I guess the $25 I spent in there for breakfast isn't enough for him to care.

This used to be a nice place for breakfast, but after the experience I had last Friday, then the apathy of the owner not responding, I highly encourage people to go somewhere else for breakfast.

Breakfast and coffee have always been good the many times I've been. They don't charge for internet.

One of my favorite downtown restaurants. Great for lunch; I highly recommend getting the turkey apple wrap. YUM!

The wifi tends to be a bit slow, but they have tables by the windows with power outlets, which makes up for it! A couple of outdoor tables are nice as well on a beautiful Kansas day!

amandae 13 years, 4 months ago on Mirth

Mirth is no corporate restaurant, the food is all cooked super fresh out of a tiny kitchen, often with only one cook and one waitress -- so be patient! It doubles as both a coffee shop and a full-blow restaurant with monthly dinner specials, so let the person working know whether you're just in for coffee/tea/internet/study session or if you'd like to have a sit down meal -- either way, they're happy to help, but if you grab a cup of coffee, whip out your laptop and don't say anything to them, expect them to think you're just in to soak up some bandwidth and not offer you a menu.

Overall a great restaurant, locally owned but mostly run by college students doing their best to make people happy -- be nice and patient and they'll be equally as pleasant right back!

The Mirth has great food and coffee. The wireless in the building is free.

andrealp 14 years ago on Mirth

I love Mirth's food, but the service is just atrocious. I went there for dinner yesterday with a friend only to be outright ignored for over an hour. I'm breaking up with the Mirth, and feel like I've just escaped an abusive relationship.

nicasia 14 years, 10 months ago on Mirth

The food is good here. Nothing too crazy, but still delicious. The waitresses are great. Tip about the internet: If you bring your own laptap its free! Can't beat that.

nattyamerican 15 years, 2 months ago on Mirth

Why would you post a negative comment because an internet cafe charges you to use their computers? Is it supposed to be free? Wireless is free there. Bring your own computer.

Mirth has a great atmosphere and food. It's not a restaurant, it's a little cafe, so when large crowds show up you do have to wait. But it's worth it! or just eat there when it's not crowded and you won't be dissapointed.

If you don't want to have to pay for the internet...don't go here, starbucks, or Borders.

Food is excellent. If you are an individual wanting to dine, forget about the Mirth. On numerous occasions, I have been ignored and forgotten about. While this occurs to me at SEVERAL downtown restaurants, I have made a point to refrain from eating at the Mirth.

This was one of the worst experiences I've had in a long time in Lawrence! We were there for breakfast and were the second couple there and it took thirty-five minutes to receive two omlets and when we received them they were cold and the potatoes were burn't. At least the waitress discounted the ticket!!

A great place for a big brunch!

Service was slow and that one waitress is completely clueless, but the folks are friendly and the food was great although my waffles looked very much like pancakes...

Also, I'm not sure if the hot tea should've been served in such a huge mug (it was the size of teaport and deserved at least one more tea bag to brew the whole concoction).

Food was terrible!!!! and it is NOT cheap despite the larwrence.com review. The Big Breakfast is not big, served with a half slice of bread, and costs $6.50. The red beans & rice $4.50 are a half a bowl of dry Spanish rice with drained canned kidney beans. A side order from Popeye's Chicken is comparably sized and tastes much better. The Blueberry pancakes $5.00 were raw, made from bisquick, few berries, served with no butter and a tablespoon sized ramekin of syrup. The service was good but did not make up for the food being a COMPLETE RIP OFF.

katethegreat 16 years, 10 months ago on Mirth

All of my Mirth experiences have been wonderful! I love that they serve breakfast until 4pm. The biscuts and gravy are the best in town, and the tomato/cucumber/red wine vinegarette salad is the best lunch item I've had in lawrence. And SUPER cheap!!!

The portions are huge so don't be afraid to get the half size.

I hope Mirth stays around for a long time.

Good stuff. Worth checking out. Second to First Watch, this is the best breakfast in town.

rsinger 16 years, 11 months ago on Mirth

A wonderful place to get a cup of coffee and check your email or even come in for a nice dinner.

calieerin 17 years ago on Mirth

The kitchen is always open during business hours.