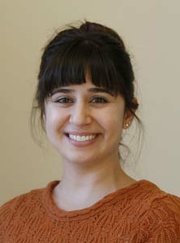 Alma Bahman is the digital editor for the Lawrence Journal-World.

To make Tzatziki sauce, you need yogurt, cucumbers, olive oil, garlic, mint, salt and pepper. And to get an authentic, genuine flavor, make sure the yogurt and cucumbers are from the Middle East and the oil is pressed from olives grown by the Aegean Sea. But how can you get that in Lawrence?

Some drink their coffee leisurely in the morning with a French pastry and a newspaper. Others need it mainlined into their bloodstream. But regardless of where you land on the scale of coffee enjoyment, La Prima Tazza is Lawrence’s choice for fulfilling its caffeinated desires.

One could argue that the hallmark of an amazing bakery is not just wonderful breads and pastries, but how soon the day’s supply is gone. And if you’ve ever been to WheatFields Bakery Cafe, you know they run out pretty quickly.

As we live a life of ease, every one of us has all we need... except maybe an amazing sub.

Black and blue. Smoke. Barnyard Bash. Lawrencians in the know hear those words and think “Burger Stand.” From humble beginnings in 2009 as an Irish pub to its residence at the Casbah, The Burger Stand has earned its accolades.

Maybe it’s the hot summers, maybe it’s because Lawrencians have an undeniable sweet tooth, or maybe it’s that a carton of Dreyer’s just doesn’t cut it anymore. Whatever the reason, Sylas & Maddy’s ice cream has earned the shop (named after beloved family pets — a cat and dog, respectively), yet another Best of Lawrence win.

Upgrade him: How men can look their part this spring

Meet Will Dale. Like a lot of men, Will could use some outside help when it comes to picking out his outfits.

The Gaming Wildlife Foundation, made up of a handful of Kansas University film and media studies graduates, hopes to take its 15 minutes of fame to full-time work.

All about eggs Benedict

The culinary folklore tells of the suave, flamboyant stockbroker Lemuel Benedict stumbles into the old Waldorf Hotel one New York morning in 1894. Battling a hangover, he orders buttered toast, bacon, two poached eggs and some hollandaise.

You wake up to an unfamiliar face sitting at your kitchen table. Its got grayed skin and large yellow eyes. Its bony fingers grip the newspaper and as it sips coffee, waiting for you. It's the monster that lived in your closet and terrified you as a child.