Now that the first month of the new year is about over, lots of us have abandoned those pesky healthy-eating resolutions and returned to our favorite comfort foods.

Hey, remember that jar of molasses that you bought on a whim ages ago? Well, break it out, because I’m using the month of December to indulge my love of gingerbread.

Bite Sighs: Pumpkin cranberry bread to take on the road

Not overly moist or crumbly as most pumpkin bread, this one is firm and slightly dense; studded with dried cranberries and white chocolate chips, it’s the perfect in-car take-along snack that won’t leave crumbs in the upholstery as you head over the river and through the woods.

The season of pumpkin spice everything is here.

Whether your day was stellar or in the cellar, there’s nothing like a treat after a hard day at school or work. Now that September is upon us, a lot of those treats might be apple-based. Throw in a little cream cheese and a lot of butter, and your apples will put a whole new spin on “wow.”

Bread-making is, truth be told, a little time consuming. It can also be tricky if you don’t pay attention to what your hands are telling you. On the other hand, the amazing smell (and taste) of freshly-baked bread makes almost any amount of effort worth it.

Bite Sighs: Make cookies out of your favorite pie

Greetings, all! Summer is here, bringing with it intense heat and an intense longing to avoid cooking anything more involved than a toaster waffle. While looking for a summer-worthy (read: simple, with minimal stove time) dessert, I stumbled across Arlene Cummings’ recipe for Mini Cannoli Cups.

The season of camping is upon us! Time for singalongs, skeeters, and those gooey little treats known as “S’mores.”

I wanted to make tiramisu for Mother’s Day, but exotic items like mascarpone cheese and ladyfingers (Seriously?!) are not to be found within 30 miles. To that end, I decided to create a simplified version, made with everyday stuff that’s easy to get ahold of.

When my friend Angie asked for a King cake last month, I was happy to oblige. I found an excellent recipe online, made the cake and was immediately addicted. Since my daily carb limit doesn’t include huge portions of cake, I decided to have a go at adapting the recipe to something smaller. Turns out, it lends itself perfectly to cinnamon rolls.

Since my kiddo is on a gluten-free diet, I’ve learned a few things about gluten-free shopping.

Have you ever had one of those uncontrollable chocolate cravings? The kind of wild craving that sends you scrounging through the cabinets, looking for a can of frosting and a spoon? Me, too.

Bite Sighs: Dine and dash with these toasty pocket sandwiches

Well, we made it to the other side of the holiday season. The big parties are over, and all of the guests have gone home. You are now faced with a refrigerator full of leftovers. Get creative and turn boring leftovers into homemade hot pock..., er, toasty pouches! Yeah, that’s a good name.

A new year is just around the corner; a fresh start full of amazing possibilities. In a fit of nostalgia, I decided to take a look at my very first Bite Sighs recipe: a Yule Log cake.

When my friend Terry described her new favorite instant oatmeal, my brain partnered with my sweet tooth to find a way to turn said oatmeal into a cookie.

It’s October, and Halloween is approaching. You know what that means? It means that everything that can be eaten, sipped or smelled has been doused in the annual Overload of Pumpkin Spice. So what have I got for you this month? A 100 percent pumpkin-free cookie recipe!

There are some days that you just feel like telling the Health Police to go jump in the lake while you curl up with comfort food.

My husband made the mistake of turning me loose in a baker’s supply house recently, and I learned a couple of important truths. First off, I am not to be trusted in the self-control department when bakeware is involved. Second, the edges of a cream horn mold are really sharp; I earned myself a finger slice while I was washing the darned things.

When you’re the 5-year-old son of an avid baker, you come to accept certain things as givens: There are always cookies in the house, your birthday cakes are unfailingly awesome and your role as Chief Taster is unassailable.

Well, I finally did it: I tried my hand at making croissants. You know what? They’re not that difficult. They’re a little fiddly, but pretty simple overall.

Sometimes you just need a little kitchen inspiration. You know those days: You stand in front of the open fridge like you expect something to dance, and you stare into cupboards as though trying to decipher the Rosetta Stone.

Well, with snow refusing to go away, it looks like there’s still time to try out those yummy-sounding soup and stew recipes that you’ve been collecting all winter. And where there is stew, there should be biscuits. By Audrey Lintner

You may have noticed from most of my columns that I have a raging sweet tooth. It’s a little hard to keep under control, especially during times of stress. I think I’ve found a way around it: Smaller portions! By Audrey Lintner

Did you make a bunch of resolutions like eating healthy foods, cutting back on sugar and losing weight? Here's a recipe here that’s gonna break all of them at once.

With so many interesting possibilities, it’s hard to choose just one kind of cookie to make on any given day. Have no fear, the magic ratio is here!

In spite of what retailers would have you think, Thanksgiving is more than just the day before the big sales. It’s a day to visit with family, count your blessings and try out those awesome recipes that you’ve been collecting.

We’re going to make a cake from scratch this time, stuffed with good-for-you ingredients and still just as simple as can be. With blueberries for antioxidants, honey for energy and the comfort factor of homemade cake, this recipe is definitely a winner.

These cupcakes are a nod to my favorite bar beverage, the Shirley Temple. Yeah, I’m a cheap date, but you’ll never catch me with a lampshade on my head.

Gift certificates are a gas! There’s something about spending someone else’s money that makes me feel like experimenting. When two of our friends gave me a gift certificate to a baker’s supply house, I went gaga.

Raise your hand if you love oinking out on crescent rolls when Thanksgiving rolls around. Yeah, me too. Fortunately for our arteries, it’s summer. Huge meals and heavy ingredients are too much trouble for hot-weather digestion, so light grazing becomes the norm.

I really like cake mixes. They’re stable and extremely versatile.

Even the best chefs have their off days, so an amateur like me shouldn’t be too shocked to have a baking session worthy of the Marquis de Sade now and then. 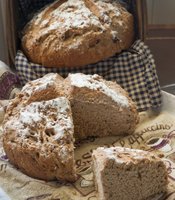 As a recent inductee into the Society for the Preservation of Irish Soda Bread, I have sworn to uphold an unwritten law of traditional Irish baking: Thou shalt not put weird stuff in thy soda bread. 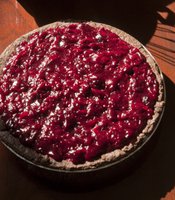 It wasn’t until I turned the calendar page for February that I realized we were getting an extra day. With an extra day comes an extra dessert, right? Yeah, I thought so, too. 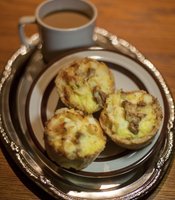 Bite Sighs: Gluten-free breakfast bake not as hard as it may sound

The very idea of dealing with something as temperamental as pie crust is enough to make many novice bakers turn in their aprons. Throw in a need for gluten-free nutrition, and you’ve got the potential for an uprising that has nothing to do with yeast. 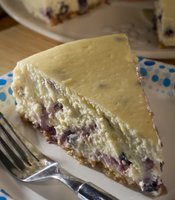 Don’t worry. This will be painless.