Micah Clement and his wife, Tawny, wanted to do something special before their baby was born. So in February, they booked a reservation at Café Beautiful, 730 Mass., expecting a good night. Their expectations were a little low. “Overall it was one of the best experiences I’ve ever had,” said Clement. “You have a window view of Mass. Street, and you can see the sunset as you dine. (The chef) serves only you, (making) it super intimate.”

Jon Georgeson, 22, has been locksmithing since he was 15. His stepfather owns Ace Locksmith in Topeka, and after school, Georgeson would head to his shop to start picking and rekeying locks. 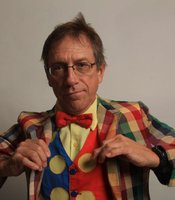 If Richard Renner were to craft a resume, under skill summary would be the following: juggling, pantomime, unicycling, rope-walking, stilt-walking and acrobatics.

Cathy King, a holistic veterinarian, sometimes jokes about what she calls a “case dispensary in the sky.” That omnipotent being that determines what sort of animals will walk into her office. And in some cases, those animals are carried. That was the case a couple years back when a woman brought in a small poodle who had blown a disc and could not walk.

Some of the worst words you’ll ever hear from a doctor: “There’s nothing we can do.”

The project was a lofty one: find and collect art created by Harlem Renaissance painter Aaron Douglas for a touring exhibit. The project was lofty partly because of the sort of work Douglas, a 1930s artist born in Topeka, created: book illustrations, book jackets, murals — things not easily preserved or portable.

Offbeat Occupations: Future's up in the air for flight instructor

Craig Harper has red hair and blue eyes, a swath of freckles splashed across his cheeks. He’s a fast talker, words marching from his mouth with a mission: to teach people how to fly an airplane, and to do it well. So no one gets hurt.

Offbeat Occupations: DJs responsible for keeping life in the party

It was his freshman year at Kansas University, and Nick Reddell needed a job. He started working bars: cleaning toilets, sweeping floors, doing the grunt work no one wanted.

One day when Sara Wornock and her husband were visiting their obstetrician, they spotted a brochure for Complete Doula Services. It was a serendipitous moment, as the Wornocks wished to have their first baby naturally but had determined home birth was not for them. 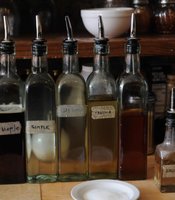 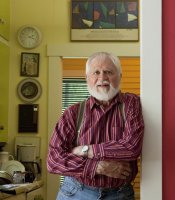 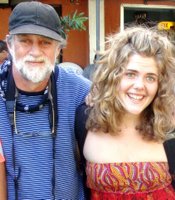 Sarah Stern, a Lawrence native and Kansas University junior, still thinks about Rocinha. It’s been a year since her trip to the Brazilian favela, but her memories are still clear and unshakable. 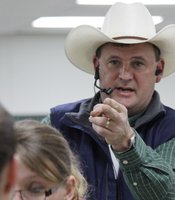 When Mark Elston was a boy he would attend auctions with his father, then come home and pretend to host his own. He would rattle off prices, selling his farm animals to imaginary bidders. “I could do it since I was knee high, but I was always scared of getting in front of the public,” said Elston.

On a recent Friday afternoon, a woman walked into Englewood Florist, 1101 Mass., with a big order: she needed seven centerpieces, plus a really large one, by 10 a.m. the next day. 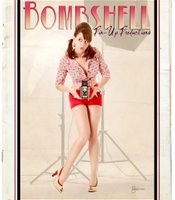 Wearing a teal dress and a pair of heels circa 1950, Emmalee Schaumburg eases into a chair in the lobby of her photography studio in North Lawrence. The sound of a woman’s voice croons over a crackly clarinet from a stereo tucked in back. Schaumburg’s dark hair is tied back, and her lipstick is bright pink, all vestiges of the era she seeks to revive through her photography. 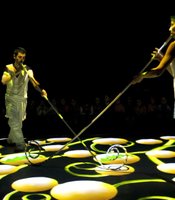 Dancers in bright green suits twirl, tuck and roll to the whimsical sounds of a xylophone. Popping noises resound through the room: it sounds sort of like a bunch of giant soap bubbles bursting at once. Then there are the crackling noises, a shell breaking. 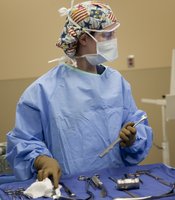 Offbeat Occupations: Surgical technician familiar with tools of the trade

Offbeat Occupations: ‘Almost anyone could benefit from dance therapy’

How one woman teaches therapeutic ways to cope through yoga, breathing and meditation. 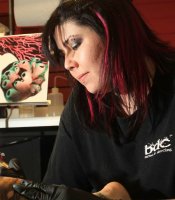 Most of us draw when we’re children. But most of us quit while we’re still young. Not so for Carrie Smith, 35, known at BDC Tattoos as Scary Carrie. 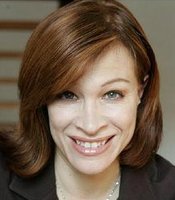 Offbeat Occupations: 'It's a good age to be a woman in theater'

When Cheryl Weaver was 5, she watched a play with her grandmother called “Dick Whittingon and His Cat.” “Just seeing this man dressed like a cat on the stage, I thought, ‘Wow, that’s amazingly cool.’ … I told my mom from that day forward that’s what I wanted to do.” 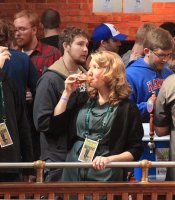 Wearing a gray wizard hat and clutching a modest sipping glass, Jeff Gill wedged his way through the crush of people and shuffled up to LB Brewing Co.’s beer booth to say hello to the vendors. Written in bold letters on the front of Gill’s sipping glass was the name of his own brewery: Tallgrass Brewing Co., of Manhattan. 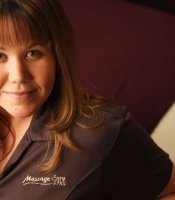 Offbeat Occupations: Massage therapist gets people out of knots

Mendy Morgan recognized the benefits of massage at a young age: As a child she would massage her mother’s feet, rub her grandmother’s arms and legs and work out the kinks in her friends’ shoulders at basketball practice in middle school. 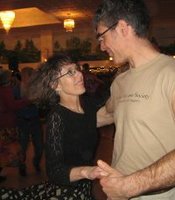 Contra dancers square off at this weekend's Midwinter Meltdown

You might spin your partner, but there's more to contra dance than most people think. 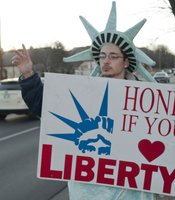 Trayvan Sullivan, 29, swaggers up and down the sidewalk near the corner of Wisconsin and Sixth streets. He is wearing a Statue of Liberty costume with a green velour robe and a 7-point crown. Slung on his shoulders is a large white sign that says “Honk if you Love Liberty.”

Jai Nitz’s desk contains objects sacred to comic book lovers: a statue of Jack Kirby, an Aztek action figure and a copy of Wally Wood’s 22 Panels — a strip that outlines the art of comics. The last item is significant if only because writing comics is what Nitz does. A rare thing, to turn a childhood passion into a career, but Nitz has done it. 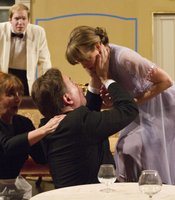 The sounds of a sitar and a pair of hand drums flow from a stereo in the corner of the room. Ten colored yoga mats are splayed across the center of the floor.

The bulldog was 10 weeks old when Jen Frazier picked him from a passel of puppies at the Humane Society and carried him to the car. Frazier clutched the dog, letting him settle in her lap as she and her husband, Nick, stopped at every pet store on the way home, loading up on food, supplies and toys. Once home, the puppy was introduced to the cats, and the rest of the night centered around play and potty time, excitement thick in the air.

Vincent Gnojek told his sons to take his word for it. 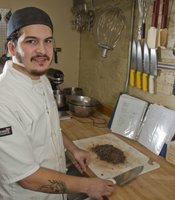 When Juan Carlos Tovar-Ballagh, 23, was a young boy, he would experiment in the kitchen — often to the dismay of his own taste buds. 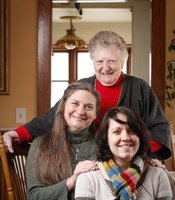 Some careers happen by accident. Passion meets timing, and a profession is born. 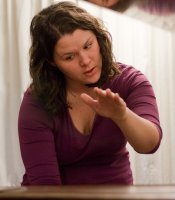 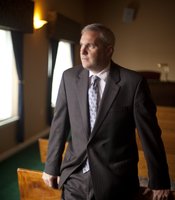 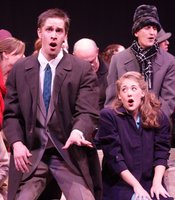 The theatrical adaptation of the Christmas classic has had some technical challenges making the move to the renovated church performance space, but the cast and crew are ready for Friday's debut. 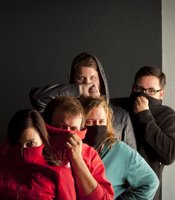 A decade of 11: Eleven Productions celebrate their first 10 years

After a decade of putting on shows in Lawrence and the surrounding area, Eleven Productions is celebrating with 11.11.11, a day-long music festival in downtown Lawrence. 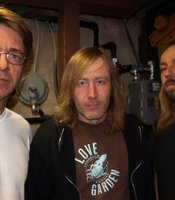 With a new fall tour underway, the forthcoming documentary "Never Make It Home" and a New Year's Eve show planned at The Bottleneck, Split Lip Rayfield carry on. But it all started at the Walnut Valley Festival. 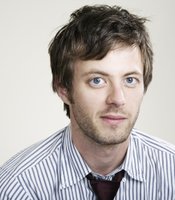 At least a couple of times a month, Sean Rudisell dusts off his old Nintendo to play video games with his daughters. Jori, 10, and Kaydi, 7, love the system. Their go-to game? “Super Mario Brothers 3.” 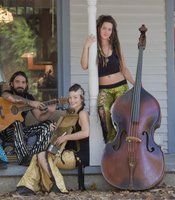 Lawrence bands like Dumptruck Butterlips and other artists are using Kickstarter to get off the ground. 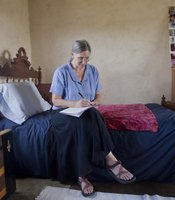 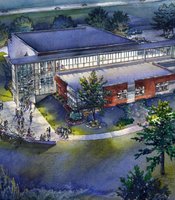 With a little more than $600,000 left to raise before Sept. 30, Theatre Lawrence is closing in on a new, bigger building. 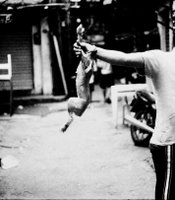 KU student Sarah Stern traveled to Rio de Janeiro, where she would act as translator and live in a favela, or Brazilian slum, for three weeks. 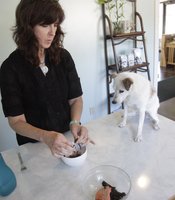 Evie Bear was stricken when she learned her cockatiel, Eyropia, had contracted heavy metal poisoning. 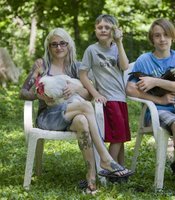 Candy is dandy, but chocolate wine really seems to get taste buds in an uproar. 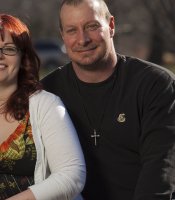 Steps in the family: PEW research shows how remarriage has shaped relationships

A survey by Pew Research Center reports that four in 10 American adults have at least one step relative. The pervasive presence of step relatives has reshaped the framework of the American family.