I was born at Lawrence Memorial Hospital, but when I was 3, my family moved from Lawrence to southwest Kansas. I grew up in Liberal, and in 2000, I started at Knox College in Galesburg, Ill., where I earned a bachelor's degree in English in 2004.

The first person I ever interviewed was Darin Headrick, my middle school principal when I was in sixth grade. He’s now the superintendent of Greensburg schools leading a rebuilding effort amid the devastating 2007 tornado.

Aside from my West Middle School newspaper class, I picked up my interest in journalism as a summer intern reporter at the Southwest Daily Times in Liberal. My editors joked about their method to teach me fairness and objectivity. I covered the school board while my dad started serving his first term.

After I graduated from Knox, I worked for one year as a reporter in Liberal until I returned to Lawrence to attend journalism graduate school at Kansas University. That July of 2005, I also began working as a part-time reporter at the Journal-World.

In June 2007, I started work at The World Company full-time, and I have mostly worked as a general assignment reporter, meaning two things: I get to either cover whatever I want or whatever my editors tell me to for our Web site, the newspaper and 6News.

In my spare time, I follow KU sports teams, try to tackle my reading list, and watch way too much football. I refuse to give up on the Kansas City Chiefs.

You can also follow me on Twitter, where I try to provide updates on court proceedings, political speeches and news. 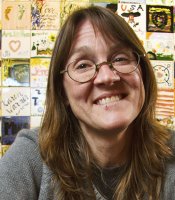 It’s a family affair when Amy Albright, her husband Doug Davison and their three daughters spend time at the Lawrence Arts Center. And Albright says her family wants to give back to the arts community, especially after benefiting from scholarships from the arts center for the girls to participate in classes there.

Lawrence resident Jim Sneegas is still deciding which one of his old motorcycles he will put in the 2011 Bike Show and Swapmeet on Feb. 6. He has plenty of options. 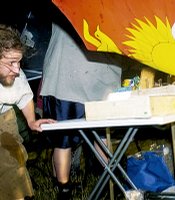 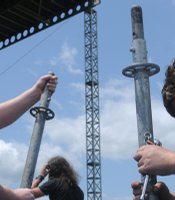 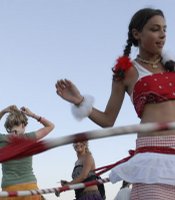 Wakarusa Music and Camping Festival promoters are exploring their options. "We're investigating the opportunities of places to host the event is all, and we've done that annually, so there's really no news until after Thanksgiving probably," said Brett Mosiman, the founder of the festival, conducted the past three Junes at Clinton State Park.

Spencer to show off Spooner's prizes

Artifacts have been out of sight since anthropology museum's closing

Some of Kansas University's more than 10,000 collected ethnographic artifacts will begin showing up in an exhibit this summer at the Spencer Museum of Art.

The thousands of mostly happy campers started taking down their tents Sunday evening in between hearing more from some of their favorite bands at the Wakarusa Music &amp; Camping Festival.

School of Rock the Vote

Dozens of Lawrence teenagers cast votes Wednesday and here's what they decided:

A variety of Bill Snead's photographs from more than a half century of shooting are now on display at the Lawrence Arts Center.