I began working for the Journal-World in July of 2009. My responsibilities as a web producer and overnight reporter include maintaining the Web Site at LJWorld.com and covering any breaking news that may occur during the late night/early morning hours.

I graduated from Kansas University with degrees in journalism and psychology. While at the university, I worked for the school's newspaper writing both sports and news stories along with serving as a campus editor. I chose to get involved in journalism because of the profession's lack of monotony.

When not on the job I like to concern myself with activities competitive in nature. I use sports such as soccer, disc golf and sand volleyball as ways to relax and pass time.

My favorite word has always been "drink." I like the way it sounds and it reminds me of Plinko on The Price is Right. Persnickety is a close second.

Children and their parents spent a few hours downtown Friday night painting and decorating cars of the real and cardboard cutout varieties as part of the pre-parade festivities for the 2011 Art Tougeau Parade. 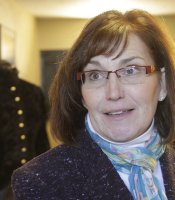 On any given day, it would be safe to bet that Jane Pennington has safety pins nearby. They’re tools of her trade. Pennington, a costume designer for Theatre Lawrence, knows what she’s doing.

The pursuit of an entertaining night out with friends in Lawrence is anything but trivial. 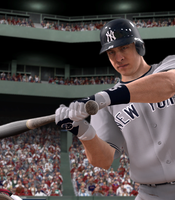 The boys of summer are back in an edition that features enough technical improvements to warrant playing.

Group hoping to get KAWR, a community radio station, up and running in Lawrence

In 2007, Kevin Kennedy saw an opportunity. Slowly but surely that opportunity became an idea, then a reality. 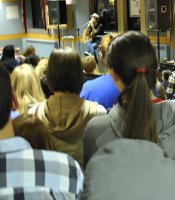 Singer-songwriter Jason Mraz played an impromptu concert for a few hundred fans in the fourth-floor lobby of the Kansas Union on Friday evening. 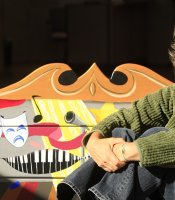 Five of Lawrence’s top artists will be recognized Sunday afternoon during a ceremony and reception for the 15th annual Phoenix Awards. 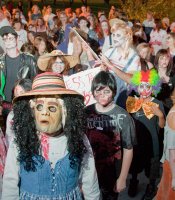 It took Tina Gordzica about 15 minutes to go from the living to the undead Thursday night. 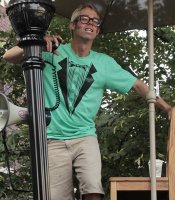 Refreshments, entertainment a popular draw for those who have shopped Sidewalk Sale a bit too much

Live updates from the Sidewalk Sale

A band. Free water. Cookies. Massages. While some were shopping, others were taking advantage of the free refreshments and entertainment available to those who came downtown for the annual sidewalk sale.