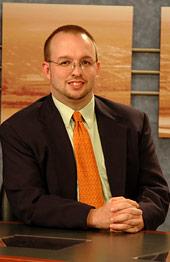 Degree: Bachelor of Arts in Communications, with an emphasis in journalism

At what moment did you realize you wanted to become a journalist (videographer, meteorologist, sports reporter, etc.)? And if there wasn't a specific point in time, what was the motivating factor?

I've always loved history. When I was in high school watching coverage of the Tiananmen Square protests in China during the summer of 1989, I knew I wanted a job that would help me touch history as it was being made.

When you really want to relax and let your hair down in Lawrence, where do you go and what do you do?

Cover myself in chocolate sauce and... never mind.

As is probably too well known, I spend lots of time in downtown coffee shops -- great places to read, meet new people, get into lively discussions and make new friends.

What comes to your mind as the most memorable local story you've covered?

I would say the December 2000 bank robbery standoff that resulted in the evacuation of businesses around Ninth and Massachusetts streets. I remember that story because it was more complicated than a simple crime -- it was about a financially desperate man who committed a foolish and desperate act.

If you couldn't be a reporter, what occupation would you want to try?

Owner of a small, struggling bookstore.

If you were stranded on a desert island with only one song to listen to and one book to read for the duration, what would they be?

The "Kansas: Land of Ahs" theme from 20 years ago. "A Prayer for Owen Meany" by John Irving.

If they were going to execute you tomorrow, rightly or wrongly, what would your last meal consist of?

Cup O' Joel: No offense, but ... Lawrence is way cooler than your hometown

Lawrencians at their best when rubbing elbows

Everybody needs a little Sousa now and again.

Forget, for a second, about the triumph of the human spirit.

It's hard to do farce in the 21st century.

Finally, there's proof that Lawrence is the center of everything.

A retired Kansas University professor says the federal government has been poking into the mail he receives from abroad.

As KU classes resume, officials on prowl for underage drinkers

It's that time of year at the Red Lyon Tavern. With college students flooding back into town, bartender Chris Neverve knows he'll probably see more than a few fake driver's licenses - some of them comically incorrect - from youngsters trying to buy a beer before they turn 21.

The Moon Bar, 821 Iowa, was transformed Friday into a very different establishment: "Rosie's Cafe," an eatery specializing in strawberry pie. It might be difficult to get your own slice, however; the cafe and the pie were fiction, created for a feature-length independent movie being shot by a Lawrence filmmaker.