Cup O' Joel: No offense, but ... Lawrence is way cooler than your hometown

Lawrencians at their best when rubbing elbows

Everybody needs a little Sousa now and again.

Forget, for a second, about the triumph of the human spirit.

It's hard to do farce in the 21st century.

Finally, there's proof that Lawrence is the center of everything.

A retired Kansas University professor says the federal government has been poking into the mail he receives from abroad.

As KU classes resume, officials on prowl for underage drinkers

It's that time of year at the Red Lyon Tavern. With college students flooding back into town, bartender Chris Neverve knows he'll probably see more than a few fake driver's licenses - some of them comically incorrect - from youngsters trying to buy a beer before they turn 21.

The Moon Bar, 821 Iowa, was transformed Friday into a very different establishment: "Rosie's Cafe," an eatery specializing in strawberry pie. It might be difficult to get your own slice, however; the cafe and the pie were fiction, created for a feature-length independent movie being shot by a Lawrence filmmaker.

With moving season here, curbside finds are everywhere, but few realize Dumpster diving is a crime

Lacey Dumler doesn't often intend to go Dumpster diving. But sometimes, she says, the opportunity is too good to refuse. Take, for example, the time Dumler - an eight-year Lawrence resident - found an abandoned Papasan chair left by the garbage during one of the city's big moving weekends.

Clinton Lake State Park was being transformed Wednesday from a sleepy camping area into a concert venue that will house and host thousands of music lovers for the next four days, starting tonight.

For $100 or more, Kyle Billings can help you dress exactly like Darth Vader for tonight's premiere of the sixth and last "Star Wars" movie.

Environmentalists say it's easy being green in Lawrence

Standing on the Kansas River levee last week, it wasn't hard for Carey Maynard-Moody to start ticking off a list of Lawrence's natural resources.

Is Mr. Spock a Jayhawk? That's tough to say -- no one has seen 23rd century graduation records at Kansas University. But KU has certainly played a role in shaping the "Star Trek" universe. 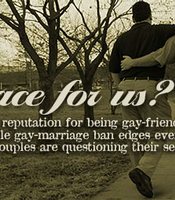 A place for us?

Lawrence has a reputation for being gay-friendly. But as the Kansas Legislature edges ever closer to letting voters weigh in on a constitutional amendment banning same-sex marriage, couples are questi

Maureen Warren was a high school student in Garden City when she realized she was lesbian. She let only a few people in on the secret. "In fact, I still continued to publicly date guys," Warren said last week. "I came out to my mom and some friends maybe as a senior in high school. I came out completely once I came to KU."

Kansan connects with youth through role in 'Anchorman'

Bill Kurtis never expected to become a youth icon. But Kurtis, a 1962 Kansas University graduate and host of A&E television's "Investigative Reports," says that's exactly what has happened ever since he narrated the Will Ferrell comedy "Anchorman: The Legend of Ron Burgundy." 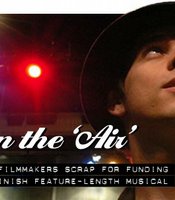 After two hours of setting up a camera, putting lights in place and otherwise getting organized, it is time to shoot the day's first scene for the movie musical "Air." "Roll camera," director Jeremy Osbern murmurs. Then, over the fierce buzz of the rolling film, he calls out: "Action!" 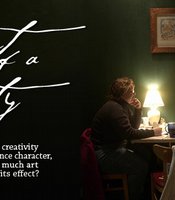 Art of a city

Lawrence derives character from ubiquity of art, but can too much of a good thing be a bad thing?

Maybe, just maybe, it's too much of a good thing. There's so much art in Lawrence -- sculptures on the street corners, paintings in the coffeehouses, photo exhibits in pizza joints -- that Brett Allen thinks many people just don't notice it.

Alfred Kinsey probably didn't wear Bermuda shorts while gardening. He likely wore even less than that -- at most a loin cloth or Speedo, perhaps. 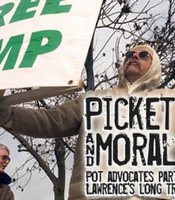 There's a T-shirt on the wall of Henry's coffee shop in downtown Lawrence bearing a map of Kansas.

"A Kansas Nutcracker" is one of those events that can put you in awe of Lawrence's artistic resources.

Fatal shootings at an Ohio nightclub was topic No. 1 Thursday among veterans of Lawrence's live music scene.

Barry Champlain is a profane, angry motormouth contrarian, a man willing to insult you for your opinion no matter what opinion you hold -- who will, in fact, insult you for precisely the opposite reason he insulted another person five minutes ago.

While researching a new book identifying Lawrence locations significant in the life of Langston Hughes, Denise Low and T.F. Pecore Weso made an interesting discovery.

The real star of Dave Pietro's Banda Brazil is not, as you might expect, Dave Pietro. That's no knock on Pietro, a saxophonist with lots of ideas -- influences from Brazil, Brubeck and the Bhagavad-Gita can be heard in his music -- and sterling technique.

Where does God fit in Lawrence?

When Andrew Stangl was a senior at Andover High School near Wichita, he started a "freethinkers' club" for nonreligious students. It was not a big hit.

Steve Vukelich was tired of regular radio. Tired of commercials. Tired of flipping through the dial without finding anything he wanted to hear. Tired of getting bored during his three-minute car rides to work.

Got the balloting blues? The Democratic Doldrums? Election depression? No surprise. The rush of political energy and adrenaline has come to a screeching halt now that an intense yearlong presidential election campaign is over - with President Bush winning another four years in office.

Art of 'Aja' shows promise but needs a few tweaks

There's a lot of sharp acting in "The Art of Conquering Aja." A lot of good writing, too. And the set design is imaginative, given the resources (minimal) and location (the Ecumenical Christian Ministries basement) that director Tim Cormack has to work with.

Godzilla gets props as he invades city

It might be the biggest, scariest proclamation in city history. City commissioners Tuesday night are slated to designate Oct. 24-30 as "Godzilla Week."

In New York City, nibbling at 'a buffet for the mind'

The New Yorker Festival is a buffet for the mind.

Politics and music will be mixing in a big way next week - starting tonight - in three separate shows at The Granada Theatre, 1020 Mass., designed to get out the vote among college-aged students of all political persuasions: Republicans, Democrats and independents.

Given Kevin Mahogany's imposing size -- a reminder of his gridiron days at Baker University -- one might have expected him to start with vocal fireworks the second he took the Lawrence Arts Center stage Friday night -- a Ruben Studdard for the jazz set.

At stroke of midnight, it's outside for smokers

Enforcement of ban to be on complaint basis

At midnight tonight, indoor smoking at most public places will become illegal in Lawrence.

Back in the late 1990s, Shaun Trenholm started a bar, Second Wind, that catered to nonsmokers. It promptly went out of business. "We didn't make jack doo-dah," said Trenholm, who owns the more successful West Coast Saloon at 2222 Iowa, where smoking is allowed.

Downtown bar owner Charles Whitman figures there's one scenario worse for downtown than having too many bars. "It's (being) empty, of anything," the Bourgeois Pig co-owner said Wednesday at City Hall. "Empty would be infinitely worse than any number of bars downtown."

The Replay will continue in play. Faced with an overflow crowd of supporters troubled about the future of the popular concert venue and watering hole at 946 Mass., the Lawrence City Commission voted unanimously Tuesday to grant a waiver that allows the bar to stay in business.

Workers band together to save Paradise

Paradise may not be lost, after all. Employees of the beloved-but-troubled downtown eatery are banding together to save the restaurant operations of Paradise Cafe, 728 Mass.

Town gets dose of 'shotgun journalism'

Mike Caddell, publisher of the Fightin' Cock Flyer, is a self-described hell-raiser - a practitioner, he says, of "shotgun journalism." Put another way: He makes people angry.

"The Glass Menagerie" is a play that has always flaunted its own, well, playness.

For Mabel Holland and her brothers Bernard Rogers and Charles Rogers, Quantrill's Raid is more than history. It's a family tragedy.

By Joel Mathis Here's a short list of items in Lawrence's economic development toolbox: Industrial parks, tax abatements, street musicians. Think that last item sounds far-fetched? Maybe not. A new book by Carnegie Mellon University professor Richard Florida says a city's "creative class" may be one of the most important factors in its economic vitality.

By Joel Mathis Jon Francis looks out from his Massachusetts Street storefront and breathes in history. "You've got buildings that go back before Quantrill's Raid," said Francis, owner of Francis Sporting Goods and president of Downtown Lawrence Inc. "The age of the buildings is tremendous. Downtown is incredibly special."

900 block of New Hampshire to be repaired, repaved in wake of construction project

By Joel Mathis The 900 block of New Hampshire Street took a beating from heavy construction equipment during the year it was closed to build the city's new parking garage and Lawrence Arts Center.

By Joel Mathis The message has been steady as a drumbeat from City Hall in recent months: It's time to tighten belts. Even so, Lawrence city commissioners are preparing to help another outside agency with its bills in the same fiscal year that already has seen a hiring "chill" in city departments.