John R. Phythyon Jr. is a freelancer for the Lawrence Journal-World. He writes the Centerstage blog and about theater in Lawrence.

KU to stage Nobel laureate’s ‘The Other Shore’

The theater is an interesting place to experience abstract art. Because a play happens live, the audience expects concrete representations of place through the set, of characterization through costuming and of action through sound and motion.

Theatre Lawrence's production of "The Great Gatsby," which kicks off Friday and runs through April 27, tells the story a Jazz Age millionaire and the young man who is drawn to him.

Spencer Lott has a long history at the Lawrence Arts Center. The Lawrence native and Kansas University graduate is now a teaching artist at New York’s New Victory Theater, but he’s back in town for the Arts Center’s new production of “Pinocchio.”

One of the hardest things to do in art is to make something old and familiar fresh. Danny Devlin has some ideas about that. "‘Hamlet’ is the most well-known, well-researched play ever,” he says. “We’re taking three very different approaches to it.”

When it comes to fundraising, a little competition is good for the bottom line. So the thinking goes at Theatre Lawrence, which is preparing to hold its annual “Dueling Divas” event Saturday night at its 4660 Bauer Farm Drive location. Eight local singers compete against each other “American Idol”-style to see who can raise the most money.

“Wrong Window,” which opens Friday at Theatre Lawrence, is about as different from heavy drama as one could imagine. The 2008 comic caper spoofs a number of Alfred Hitchcock films, especially “Rear Window.” 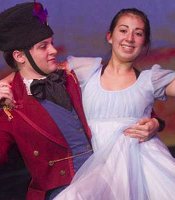 Ric Averill has been thinking a lot about heritage recently. The longtime performing arts artistic director at the Lawrence Arts Center draws back the curtain on his latest project Friday, “Sweeney Todd: The Demon Barber of Fleet Street.” By John R. Phythyon Jr.