For my final column, I’d like to present this updated, family-friendly guide to all things KC.

Is New Year’s overrated? It depends who you ask. All the same, a memorable night out on the town on the last/first day of the year can provide you with a snapshot in time that you’ll remember long after the hangover wears off.

Audiences in Kansas City got their first peek at the Kansas City Ballet’s bold new production of “The Nutcracker” last week, and the opening performance was met by spontaneous applause and cheers of delight. The massive redesign, led by artistic director Devon Carney, brings a visually stunning overhaul to the classic ballet, with new choreography, costumes and set designs.

Here are some of this week's most exciting events amid a busy time of holiday happenings.

Kansas City Connection: Pick up a unique gift at an upcoming arts and crafts fair

Next weekend in Kansas City, several independent holiday arts and crafts fairs will give shoppers and arts fans a chance to check out a wide variety of items for purchase.

No sooner had last Sunday's holiday preview gone to press than I learned of two more interesting stage events taking place through 2015 in Kansas City.

You've likely seen news reports and alarmist email forwards about an alleged "War on Christmas," but what's less publicized in the media is Kansas City's perennially successful "Campaign for Christmas Cheer (And General Holiday Merriment)." Whether you prefer a secular or a nonsecular Starbucks cup, this year's holiday arts preview includes KC holiday classics for people of all beliefs, interests and ice-skating abilities.

One of my favorite places in Kansas City for a nice lunch, dinner or cocktail is The Farmhouse, a farm-to-table, “tip-to-tail” restaurant that offers a delicious variety of entrees and sandwiches using fresh meats and vegetables from regional providers.

After 10 years of daily concerts, drinks and a menu filled with clever musical references, Kansas City’s recordBar will relocate from the Westport Landing strip mall when its lease is up at the end of the year. 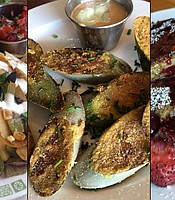 This week, take a look at the organic and gluten-free vegan fare at FüD, plus Halloween events and Janet Jackson comes to Sprint Center.