In summer, a number of outdoor events, festivals and destinations reinforce the strong sense of community spirit that has been hibernating through the winter months. Let’s take a look at some of the season’s most enticing prospects.

With spring weather finally here, this is an excellent time to visit Kansas City for a leisurely stroll in one of the area’s many parks and nature areas, which provide an oasis for city dwellers and an excellent day trip for Lawrence visitors. 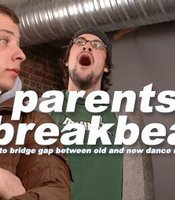 Your Parents Got Breakbeats

Richard Gintowt is surely best known to readers of this publication as a writer and reviewer. But outside of the day job, Gintowt is the frontman for reflective rock/country outfit OK Jones.

New York and Kansas don't necessarily have a lot in common. One state is home to the bustling financial and cultural capital of America, while the other is mostly made up of small towns, livestock and open spaces. "The Wild Farewell" is The Harvey Girls' willfully schizophrenic attempt to musically reconcile the two locales.

Tamara Heim has been waiting for sixth months to see the film adaptation of her brother Scott's novel, "Mysterious Skin." The film, which follows two Kansas teens' attempts to overcome the abuse they suffered as children, debuted on the coasts and overseas as early as April. This weekend, "Mysterious Skin" makes the long journey back to the land where it takes place.

K.C. hip-hop group moves closer to the edge of success

It's a sunny Sunday afternoon on the patio of McCoy's in Westport, and it's also the first time the entire crew of Vertigo has been together in weeks. Rapper Ground Zero has just returned from touring withTechN9ne, and the Kansas City-based hip-hop group is gearing up for a main-stage performance at Spiritfest. Introductions are made and I mention dropping their new single, "KCMO" at a recent house party for a group of my brother's friends. "Next time you have a house party, you let us know and we'll be there," says Ground Zero, a KC native who is as friendly as his figure is imposing.

In his office upstairs from Paradise Cafe tucked behind divided rooms and a kitchenette Schuyler Lister sits at his desk and talks on the phone. Behind him is a giant dry-erase board full of concert dates and contacts. He hangs up the receiver and shrugs. Something about invoices. Tuesday afternoon, and it's business as usual at Paradise Cafe, 728 Mass. Lister dismisses the phone call before launching into his favorite part about the restaurant: live music. Well, that and the food. But as Lister is quick to point out, he and his staff are working hard to make the establishment synonymous with both.

Just a few years ago, Lawrence was a rock town. Period. Sure, there were those with hip-hop visions, but they weren't to be found on flyers nor on stage. Not yet.