He was a hip-hop artist who performed in a musical genre that often focused on a world of money, drugs, guns and women. A year ago, that world became all to real for Anthony "Clacc" Vital. On the morning of Oct. 15, 2006, the body of Vital, 28, was found along the side of a private country lane west of Lawrence. He died from multiple gunshot wounds. The case remains unsolved.

Bibliophiles on same page for sale

Variety of books and other items available

One of the city's best-attended book events kicks off Thursday.

Kevin Lucey knew Sunday afternoon would be emotional for him as he sat in a small Kansas University theater in Murphy Hall. But it turned out to be a little more emotional than he was expecting.

Lawrence has lost a key figure in its downtown entertainment scene.

The owner of a carnival that provided entertainment at the Douglas County Fair has been cited by state health officials for operating without a food service license.

On the move at KU

Throngs of Kansas University students returned to campus residence halls Sunday, traveling in vehicles packed with everything from clothes and food to stereos and television sets.

Douglas County Fair to kick off this weekend

More than 20,000 people, almost 6,000 exhibits and hundreds of pounds of funnel cake. That's what's in store at the Douglas County Fair, which begins officially this weekend with horse shows, and which hits full gear Tuesday with a carnival, exhibit judging and other popular events.

They enjoy working on cars, scouring salvage yards for early 1970s Impalas, and they absolutely love the sound of metal crashing against metal on hot summer nights.

A Connecticut man sought during an intensive search at Clinton State Park left a message on his parents' answering machine Tuesday evening saying that he had left a weekend music festival and had arrived at another location.

As Wakarusa festival-goers roll out of town, recyclers step in

It had been more than 12 hours since the Wakarusa Music &amp; Camping Festival had concluded, but Vincent Scerbo and Laurie Marshall were in no hurry to pack up and leave.

The Wakarusa Music & Camping Festival drew toward a close late Sunday much the way it began, with bands performing on stage and thousands of people having a good time.

On the night of June 10, 1882, a mob of angry white men forced their way into the Douglas County Jail, dragged three black men out of their cells and marched them down to the Kansas River bridge.

Jon Dubin had it made. The Kansas University freshman from Denver sat back in an old, food-stained recliner and relaxed, surrounded by empty taco wrappers and pizza boxes. He wore a stuffed white T-shirt, which gave him an obese appearance. The T-shirt was covered with ketchup stains and French fries. On his head was an empty chicken bucket.

Inside the stifling tent somewhere in the Saudia Arabian desert, the American Green Beret and the Egyptian soldier had been engaged for several minutes in an intense arm wrestling bout.

A mother and daughter team from Lawrence put the right spin on the "Wheel of Fortune" during a taping of the popular television game show Friday in Kansas City, Mo., and then walked away with some big bucks.

Bill Wachspress has never thrown a javelin. That's why he purchased one for a few dollars Saturday at the annual YART sale in New York School's gym. 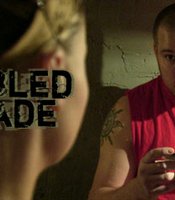 Trouble is Trent Tiemeyer's business. As a bouncer-for-hire at some of Lawrence's busiest nightclubs, Tiemeyer has taken guns away from customers, head-butted a rowdy drunk and tossed more than his share of troublemakers out the door.

Investing time, energy and money in the arts benefits an entire community, a Minneapolis couple said Tuesday during an appearance at Kansas University.

Halloween scares up visitors for tours of state's 'haunted' sites

Who needs Ghostbusters? After all, ghosts are good for business, many cities are finding out. In cities across the country, private entities, chambers of commerce and tourist bureaus capitalize on the public's seasonal interest in the supernatural by conducting Halloween tours of supposedly haunted locations.

Forget about wearing your emotions on your sleeve. This time of year people with strong feelings about political candidates and issues are turning themselves into walking billboards by wearing T-shirts emblazoned with political slogans.

Lawrence residents will have to wait -- though not for long -- for Michael Moore's controversial "Fahrenheit 9/11" to be shown in the city.

Patty Burr put her fantasy world on display Sunday afternoon. That world consists of psychedelic-colored ceramic fish, frogs and even a few eels, all of which were getting attention at the 43rd annual Art in the Park event in South Park.

Lawrence lands on list of best places to live

Lawrence and Wichita have a new commonality. Both cities are among America's Top 100 Places to Live in 2004 according to Relocate-America.com. The Web site helps people find communities that fit their family's needs.

Free Tipsy Taxi rides to be offered for revelers

The end is near for 2003. Get ready to welcome 2004. As one of the biggest party nights of the year, New Year's Eve will find area bars and clubs packed with revelers for music, dancing and drinking -- and some celebrating too much.

It's the end of an era for Paradise Cafe, a downtown Lawrence landmark. The restaurant at 728 Mass. is no longer serving food, Schuyler Lister, an investor and manager of daily operations, said Monday. The focus now will be on the bar and entertainment aspect of the business, he said.

Where the wild things are...

Exotic pet owners take walk on the wild side

Things haven't been the same at Dick and Barbara Stephens' Jefferson County farm since a cougar named "Stinky" took up residence there eight years ago.

The two young women stumbled out of It's Brothers Bar & Grill, one leaning heavily on her companion as they made their way south on the sidewalk. Lawrence Police Officer Tony Garcia was standing on the curb in the 1100 block of Massachusetts Street, his arms folded, as they passed shortly after 2 a.m. on a recent Sunday morning.

Angered by "the elitists" attending a $500-a-plate dinner Monday to see former New York City Mayor Rudolph Giuliani receive an award, Lawrence anarchists took their protest into the streets and clashed with police.