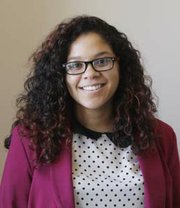 Lounging comfortably on the couch in his home, Kliph Scurlock says he has found peace since his firing as drummer of The Flaming Lips became public five months ago.

For Kansas University alumna Corine Wegener, saving the arts has a literal application in her profession as a cultural heritage preservation officer. A modern-day “monuments woman,” Wegener travels into war-torn countries, and much like the Monuments Men who traveled to Europe to recover Nazi stolen art, she helps museum staff reclaim and protect cultural treasures.

In September, Tegan and Sara celebrated the 10-year anniversary of their fourth album and commercial breakthrough, “So Jealous.” Before Tegan and Sara share the Liberty Hall stage on Wednesday, Tegan shares her thoughts on the major changes they've witnessed in the past decade,

Skip the morning orange juice for a specialty creation of your own using fruits, vegetables and herbs. Tweak some classic cocktails with seasonal fare straight from the garden. Make your own juices, mocktails and cocktails with some help from a local juicer and local bartenders who serve garden drinks at their own businesses.

Stand-up comedy is on the rise in Lawrence as local collective Harpoon Presents creates opportunities for comics to develop their shtick in hopes of pursuing this unconventional career avenue. Local stand-up comedian Shadoe Barton shares what it's like to try to be funny.

When an entire production is centered around a flesh-eating plant, it’s going to take a talented group of creative minds to bring “Little Shop of Horrors” to life on the Theatre Lawrence stage.

Turn your bedroom into a sanctuary

It’s important to have a personal space to unwind that's away from the rest of the world. That place should be your bedroom, said Dana Niemack, a feng shui interior designer.

The Lied Center will serve as a one-stop shop of musical talent on Friday night as the Kansas University School of Music presents its 15th annual Collage Concert.

The Lied Center has a reputation for bringing world-class performers to the community, and this fall is no different. From critically acclaimed musicians to Broadway stars to comedians, here is a preview of this fall's Lied Series events:

As the cool weather makes its way into Lawrence, make your way inside to the nearest exhibits, readings, performances, music and lectures by artists coming though town and those who live here. Mark your calendar for some of these notable events.