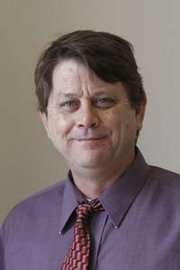 I cover K-12 education. That includes Lawrence USD 497 as well as state policy issues from the legislature and State Board of Education.

I am a graduate of the Kansas University with bachelor's degrees in political science and education. Before joining the Journal-World, I published an online news service called the Kansas Education Policy Report. I also spent nine years as the statehouse reporter for Kansas Public Radio and worked a couple of years as the spokesman for the (former) Kansas Health Policy Authority.

You can follow me on Twitter (@ljwpqhancock) or join our conversation about public schools on the First Bell blog.

Whatever the secret is to a great marguerita, El Mezcal seems to have found it. And manager Francisco Mendez isn’t saying what it is.

In 1989, the Free State Brewing Company became the first legal brewery in Kansas since Prohibition, and it’s been a fixture in downtown Lawrence ever since.

Since 1996, customers have been bringing in books they want to sell or trade, and buying the books that others have enjoyed once and passed along. The result is a bookstore in the heart of downtown Lawrence that typically has upwards of 60,000 titles on the shelf, spanning nearly every genre.

For Ken Baker, wine isn’t just something you drink with dinner. It’s a whole food group unto itself.

Laura Porter has been teaching at Bishop Seabury since 2005. Before that, she taught at the Lawrence Alternative School for two years and at South Junior High for 16 years before that.

The restaurant known simply as 715 has been called a “European bistro in downtown Lawrence,” with a menu that is like “peasant food fit for a king.”