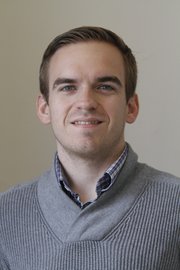 I write news features and profiles while also covering education in Lawrence and the surrounding area. Previously, I served as the Journal-World's crime and courts reporter and earlier spent nearly two years as community sports editor for The World Company's weekly newspapers and websites in Northeast Kansas: The Basehor Sentinel, Bonner Springs Chieftain and Shawnee Dispatch.

I've worked as a reporter and photographer for The Shawnee Dispatch, covering education and general assignment stories. I also interned for Lawrence.com, where I — among performing other tasks — consumed a ghost pepper on camera. Prior to joining the company, I served as editor-in-chief, sports editor and a reporter during five semesters with The University Daily Kansan at Kansas University.

The Eldridge is no stranger to rising from the ashes, most famously having been burned to the ground during William Quantrill’s infamous raid on Lawrence in 1863. The modern day, however, has seen the hotel prosper: the 48-room hotel boasts a bar, restaurant and plans to double in size moving forward.

When George Grieb bought Lynn Electric & Communications in 1999 from Chuck Lynn, who started the business in 1977, it was a small residential company whose services were largely confined to Douglas County. In the last decade, business has boomed.

The ownership at On The Rocks claims to be among the first bring the concept of a large discount superstore, mix and match beer options and a beer cave to Lawrence when the store opened in 2009. Along the way, the store added another distinction: some of its regulars are of the four-legged variety.

The result of two months of work, in which nearly a dozen students and a longtime Lawrence quilter had a hand, will soon be boxed up and shipped across the Atlantic. Now, those who produced the quilt hope to find a way to follow it to South Africa. By Stephen Montemayor

You had the facts and you voted. Here are the Best of Lawrence 2011 Winners.

There's still much time to let your voice be heard

Vote here in our 2011 Best of Lawrence competition

From now through Valentine's Day, Feb. 14, you can vote on your favorites local businesses and help them be dubbed one of the 2011 Best of Lawrence. One vote per e-mail address.